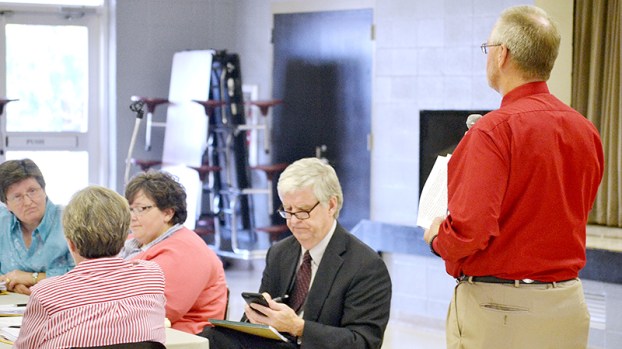 Photo by Donna Campbell/Billy Vaughn addressed the Lincoln County School Board during its meeting at Loyd Star Attendance Center Tuesday.

Three individuals Tuesday night were silenced before they were able to get their messages across — two by board attorney Jim Keith when their three-minute limit for public comment was reached and one by a Lincoln County Sheriff’s deputy on Keith’s authority for interrupting the meeting.

Only two people had signed up to speak at the meeting, which was held at Loyd Star Attendance Center. The meeting was the fourth to be held at each of the district’s schools.

Pam Case, who commented at the board meeting two weeks ago, and former Loyd Star Assistant Principal Billy Vaughn,  addressed the board individually.

Case began her comments with questions to the board concerning Joanna Posey’s appointment as a board member and Terry Brister’s employment at Enterprise Attendance Center.

“Mrs. Case, you’re talking about personnel matters,” Keith said, interrupting her. They each kept speaking, talking over each other.

She told him that she could talk because as a taxpayer she pays him and the board. He told her she had to follow the policy that was set forth.

Case said she would refrain from naming individuals and continued. She made comments about the school principal, referring to Loyd Star Attendance Center Principal Robin Case as “her” and “she.”

Keith interrupted her again. “You’re not supposed to be attacking personnel,” he said.

“I’m not calling anybody’s names. You said no names,” she said.

“Ma’am, we know who you’re talking about. You’re identifying an individual,” he said.

“If you are not going to follow the policy, then I’m going to have to ask security to take the microphone away from you. It’s your choice,” he said.

“I did not call any names,” she said.

“I didn’t say you called any names,” he said. “You are attacking personnel.”

Case started to return to her seat. “From what I understand, what we pay you each month, January and February, could be half the salary of a teacher,” she said.

Next up was Vaughn, who began reading written comments word for word, aimed at Superintendent Mickey Myers, the board and Keith.

“Before my time starts, may I address you, Coach Myers, the school board and Mr. Keith about my three minutes,” he asked.

Vaughn asked that he be allowed more than the usual three minutes to speak, citing his 33 years in the district. “I would hope I would have earned at least an extra minute or two,” he said. “Let’s be honest about all of this. My situation is one of the main reasons all of this started, so I am asking y’all for permission to use the time needed to share with the Hornetville family and all the others here what I feel needs to be shared.”

He talked about his family of educators and the influence teachers have had on his life. It took most of the three minutes to get to the second page and the feelings he had receiving his first retirement check in the mail Saturday and how much he missed the students, sporting events and the staff.

Vaughn resigned by a letter Feb. 21 which the board accepted. The letter came on the heels of accusations by parents that an unofficial Twitter account Vaughn created in 2012 — according to the account’s profile page — had “liked” pornographic posts, which allowed the images and videos to be viewed by the parents’ teenage daughter and others who looked at the “Loyd Star Act./Ath” Twitter feed. The Twitter account was a source for sports scores and school news.

Vaughn was placed on administrative leave with pay by Myers Feb. 3 through 21.

Myers has said documents have been submitted to the Mississippi Department of Education and to an information technology forensics network for verification.

The pornographic posts were dated in 2014, 2015 and 2016. During those years, Vaughn served as assistant principal and also athletic director and PE instructor.

“On Feb. 1 of this year,” Vaughn read, “all those things came to an end when a Twitter account I was responsible for liked some inappropriate post …”

And that’s when his three minutes were up.

Keith told him to stop. Vaughn said he’d asked politely if he could get more time. Keith explained the board had a policy.

“Board, may I ask you to waive your policy?” he said.

Individuals sitting at tables in the cafeteria, where the meeting was held, shouted directives.

“Speak up, board. You gonna give him extra time?,” one man said.

Board members, however, were listening to Keith, who was advising them to stick to their policy. They did.

Vaughn returned the mic and sat down to applause.

They continued with routine business of approval of the consent agenda and 16-section lease agreements before going into executive session to discuss a personnel matter.

They returned, voting to follow the superintendent’s recommendation, which was not stated, and began to discuss certified personnel recommendations for the 2017-18 school years.

Melissa Posey, who had sat quietly through the meeting prior to the executive session, asked questions of the board as they met following the closed session. Posey was escorted out by a deputy at Keith’s recommendation. “She kept interrupting the meeting,” Board President Kay Coon said.

A small section of West Cherokee Street will be closed today from 6-10 a.m. at South Whitworth Avenue to allow for construction... read more