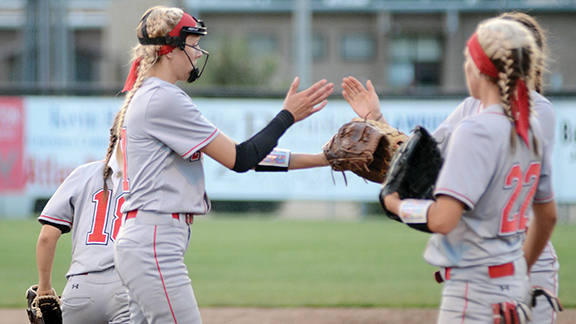 Makenzie Smith of Loyd Star (17) celebrates with her teammates after a big strikeout in their 5-3 win over Lawrence County Tuesday night. (Photo by Dylan Rubino)

After the disappointing loss to Enterprise for the district title Thursday night, Loyd Star regrouped and put together arguably their best win of the season, posting a late rally to defeat the Lawrence County Lady Cougars.

The win moves the Lady Hornets to 18-1 overall with senior night Thursday coming up against Bogue Chitto to end the regular season before the playoffs start.

“It was definitely one of our better wins of the season because of the way we came back and fought until the end,” Loyd Star head coach Jan Delaughter said. “I think we got more aggressive tonight and I had some of my young ones finally stepped up and hit the ball.”

Trailing 2-0 heading into the top of the sixth, the Lady Hornets needed to produce some runs quickly and the younger players stepped. Johnna Norman was the first to step up, hitting an RBI triple to get Loyd Star on the board and cut the deficit to 2-1.

One more rally was needed in hope of winning the game or tying it and sending it to extras. Mal Cade stepped up with a runner on first and smacked an RBI triple to left-center to score Marley Poole from first to tie the game at 2-2. Cade tried to score at home on the hit, but was called out at home after a close play at the plate and the game would go to extras.

“Sometimes you just have to take a chance and the girl made a great throw to get Mal (Cade) out at home,” Delaughter said. “It was a great slide by Mal, too.”

With the game still tied at 2-2 heading to the ninth, Marley Poole came up with the biggest hit of the game with an RBI double to left field to score two and give Loyd Star the 4-2 lead. Lydia Britt scored from third the next at bat on a wild pitch to give the Lady Hornets the 5-2 lead.

Lawrence County tacked on a run in the bottom of the ninth, but pitcher Makenzie Smith shut the door on the Lady Cougars and sealed the come-from-behind victory.

After giving up a run in the first inning, Smith settled down nicely and pitched the complete game. The senior finished the game going nine innings and giving up two earned runs on five hits, one walk and eight strikeouts.

Marley Poole shined in the big moments for the Lady Hornets, leading the team with a double, a triple and two RBIs on the night. Norman followed up going 2-for-3 at the plate with one RBI. Cade had the game-tying RBI and went 1-for-3 from the plate.

The win gives Loyd Star confidence heading into senior night and the first round of the state playoffs coming up Friday. The bad taste from losing to Enterprise for the district is gone and the team can build for the playoffs.

“I knew the team was down from losing to Enterprise and about losing district,” Delaughter said. “Us coming back and coming from behind to win the game tonight will help get their confidence back up.”

In the final game of regular season, West Lincoln jumped out to a lead in the bottom of the third... read more