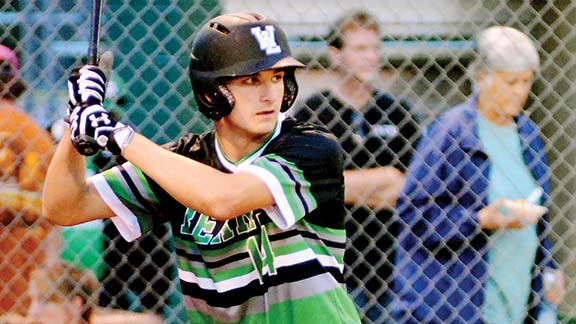 Gabe Nations of West Lincoln (14) steps to the plate in a game played recently. (Photo by Dylan Rubino)

The West Lincoln Bears staged a furious comeback in the final two innings, but the South Pike Eagles scored three runs in the bottom of the seventh to walk off and take the 6-5 victory.

The win ends the regular season for West Lincoln with an 18-7 overall record and a 10-5 record in district play.

The comeback started in the top of the sixth when the Bears scored two runs to cut the deficit to 3-2. West Lincoln took the lead in their final half inning with three runs in the top of the seventh to take their first lead of the game at 5-3.

The lead wouldn’t last long as South Pike bounced back to score three runs and walked off with the 6-5 win.

The win closes out the regular season for the Eagles with a 3-19 overall record.

Junior Kylar Fielder led West Lincoln at the plate, going 1-for-1 with a team-high two RBIs, including a triple. Senior Seth Bivens, junior Gabe Nations and sophomore Garrett Maxwell each had one RBI to round out the scoring for West Lincoln.

West Lincoln ends the regular season on a bit of a rough patch, losing five in a row and six of their last seven games heading into the first round of the 2A state playoffs. West Lincoln will face Clarkdale Friday night at home to open the playoffs. First pitch is set for 7 p.m.

The Ole Brook Panthers finished the regular season on a high note Tuesday night with a road win at Columbia... read more