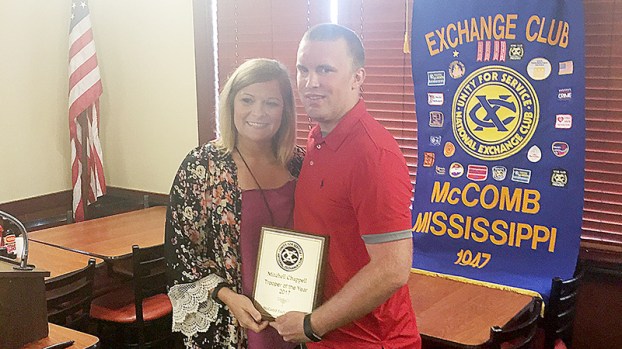 Photo submitted/Trooper Mitchell Chappell, with wife Amanda, received the Trooper of the Year for District M, which is given by the McComb Exchange Club.

Trooper Mitchell Chappell’s got a shot at winning a new revolver.

The Brookhaven man was chosen Thursday by the McComb Exchange Club as the Mississippi Highway Patrol District M Trooper of the Year. He earned a plaque and a seat at the banquet for that.

Each of the nine district winners will meet soon in Jackson for a chance to be chosen the state’s Trooper of the Year. The prize for that? A watch, a plaque and a glass-encased pistol.

“I think he’s got a pretty good shot getting trooper of the year statewide,” said Cpl. Brandon Fortenberry with the Highway Patrol.

Chappell remains on medical leave seven months after a crash nearly killed him. He was injured Sept. 11 on his way to a traffic collision in Bogue Chitto, when his car apparently hydroplaned in the northbound lane of I-55 near mile marker 31. Dispatchers lost radio contact with him, and he was found soon after unconscious in the restraints of his cruiser, which had collided with a patch of trees, Fortenberry said.

A trooper who responded to Chappell’s wreck took the injured trooper in his own vehicle, rather than waiting for the ambulance that had been dispatched from King’s Daughters Medical Center, but also hydroplaned about seven miles away on Hwy. 84 on his way to the hospital. The trooper wasn’t injured, and Chappell wasn’t injured further, Fortenberry said.

Another trooper, headed to help them, also hydroplaned on Hwy. 84 near Jackson Liberty Road. A Lincoln County Sheriff’s deputy eventually took Chappell to KDMC, where he was transferred to UMMC by ambulance, he said.

All three cruisers were totaled.

“He’s recuperating more every day,” Fortenberry said. “He’s getting better day by day but he’s still got a long way to go.”

Troop M was already shorthanded when Chappell wrecked his cruiser. Only 13 troopers work the roads in District M’s nine counties.

When Fortenberry joined the district in 2007, Lincoln County alone was served by five or six troopers.

“Now we’re so shorthanded we can’t actually assign troopers to a county,” he said.

Fortenberry is looking for a few good troopers. Actually, the entire state is. The Mississippi Highway Patrol is accepting applications for Cadet Class 62. Applications will be accepted through May 31. Applications are available at dps.state. ms.us.

Seven of the 13 troopers work the eastside — Lincoln, Lawrence, Pike and Walthall counties. Only one other trooper besides Chappell lives in Lincoln County, he said.

Fortenberry said it takes a special person to be a trooper.

“We’re looking for somebody who definitely has the dedication and the heart and is trustworthy,” he said.

Great troopers don’t necessarily have military experience or a law enforcement background. “We have troopers from all walks of life,” he said.

He said the best benefit from wearing a trooper badge is helping others. “Everything that we do is helping somebody,”  he said.

J.W. Morgan, one of the city’s first black aldermen, will be laid to rest today

John “J.W.” Morgan made history and smiles in his 86 years. Services for Morgan, one of the first black members... read more