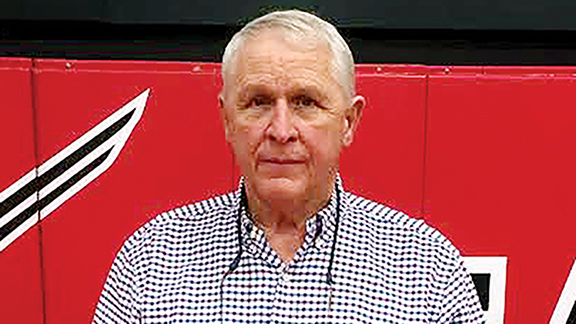 Gene Britt of Loyd Star named Coach of the Year

Loyd Star head coach Gene Britt had a tough task at hand for the 2016-17 basketball season with replacing six seniors from the year before.

Losing that many seniors, three of whom were starters, can be tough for any coach to overcome the following season.

The Lady Hornets saw no drop-off for the 2016-17 season, finishing the season with a 21-3 overall record and proved to be the best girl’s basketball team in Lincoln County.

For his coaching effort and team’s success, Lady Hornets’ head coach Gene Britt has been named The Daily Leader Coach of the Year.

“Having graduated six seniors from last year’s team, we faced a rebuilding year this past season,” Britt said. “The strong work ethic and the good quality, coachable players returning contributed to our success this year.”

Britt has been coaching basketball at Loyd Star for a long period of time. In his 44 years coaching at Loyd Star for both the boys’ and girl’s basketball teams, he’s seen many players come and go. The girls’ teams over the past couple of years have stuck out to coach Britt, with their work ethic and dedication to getting better.

“I think my girls’ teams over the past few years are is as similar to the teams I coached early in my career,” Britt said. “They all possessed the desire to win and the willingness to pay the price through hard work, dedication and putting the team first and listening to the coach and following the game plan.”

Led by another strong group of seniors, including Makenzie Smith, Faith Bergeron, Lydia Britt and Caylee Yarborough, the Lady Hornets ran through their opponents with a potent offense that spread the ball around and picked opposing defenses apart.

“One of the special things about this group of seniors and the rest of this year’s team is that they truly liked playing with each other,” Britt said. “Every game, their main goal was to defeat their opponent, not who was the high scorer, who had the most steals or rebounds.”

Loyd Star ran into trouble when they faced district opponent Bassfield during the season. The Lady Hornets handed Bassfield their first loss of the season on Jan. 27, but lost to them twice, including the district championship game by a score of 59-50.

The Lady Hornets tried to regroup for the 2A state playoffs, but fell to a tough Newton team by a score of 52-48. Loyd Star led the entire game until the final three minutes of the game, making the loss sting just a little more.

“Our final loss was a very tough one,” Britt said. “With that said, how can any coach be upset with a 21-3 season and wins over many quality basketball teams.”

Britt achieved a major milestone in his coaching career during this past season by reaching 600 career wins in coaching girl’s basketball. Not many coaches have the opportunity to coach for as long as Britt has and to have the level of success he has reached.

“So much work, dedication and so many good athletes should be credited with that coaching achievement,” Britt said. “I appreciate them all.”

The Loyd Star Hornets had no problems in their first round 2A playoffs matchup with Bay Springs, making quick work... read more