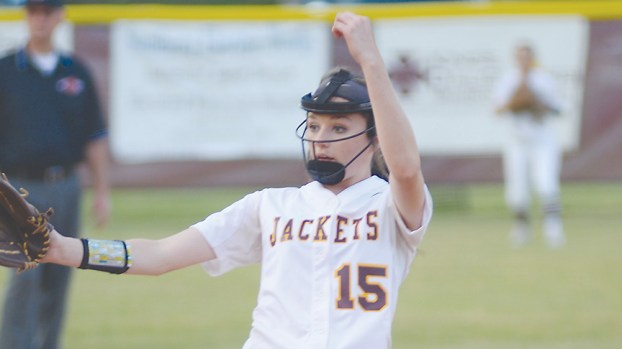 Haley Nations led the Lady Jackets to a win in the first game in the opening round Saturday of a double-header. Enterprise hosted the Pearl River Central Lady Devils, and the Lady Jackets came out on top in game one 2-0.

Mental mistakes in the seventh inning hurt the Lady Jackets in the second game and they fell to the Lady Devils 5-2.

Despite Pearl River getting a runner on in their half of the first, the Lady Jackets got out of the inning with timely strikeouts and good defense.

The Lady Jackets threatened to score in the top of the first with Jana Nations hitting a two-out single, but the Lady Devils got out of the jam unharmed.

In the bottom of the second, the Lady Jackets got their first run of the game on a pitch that sailed past the catcher to score the runner from third to make it 1-0.

The Lady Jackets loaded the bases in the bottom of the sixth and scored their final run of the game with Natalie Harris getting hit by a pitch with the bases loaded to score a run. Haley Nations kept the Lady Devils off-balanced all game long, using pitch location to set up the defense for easy outs.

Nations pitched all seven innings, giving up no runs on three hits, one walk and nine strikeouts to get the win for the Lady Jackets. Taylor Harris took the loss on the mound for Pearl River.

Lauren Gartman and Jana Nations each hit a double. Carly Polk, Haley Nations and Morgan Smith each had a single.

The Lady Jackets jumped to an early lead in the bottom of the third as Gartman belted a two-run RBI double to take the 2-0 lead. In the top of the fourth, the Lady Devils brought themselves within one on a single by Shelby Archer. Pearl River tied the game in the top of the fifth with an RBI single by Jayden Davis.

“It was good for us to get a win today against a very good softball team,” Enterprise head coach Charissa Burke said. “Now we need to be focused and be ready to for our playoff run against Clarkdale.”

The Lady Jackets will take on Clarkdale tonight for round two of the 2A state playoffs.

GOODMAN — The Copiah-Lincoln Community College Wolves defeated Holmes 12-7 in an 11-inning game one and 3-1 in game two... read more