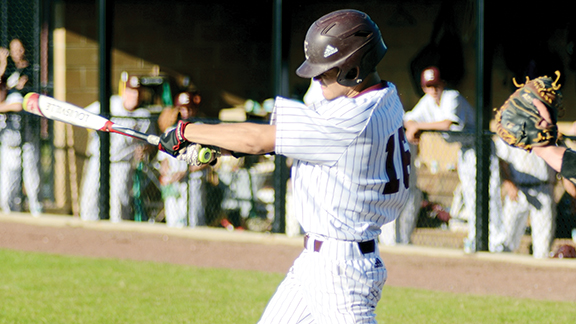 Cade Feltus of Enterprise (16) swings at a pitch in their playoff win over Union Monday evening. The junior went 2-for-3 from the plate with two RBIs, including a big double. (Photo by Dylan Rubino)

Enterprise advances in 2A playoffs

Trailing 3-2 heading into the bottom of the sixth, Enterprise pulled off the comeback Monday night to win the series over Union by a final score of 7-5.

Union struck first in the top of the second inning. With one out, Union freshman Trevor Patchin hit an RBI single to give them the lead, but was thrown out trying to steal second. Despite Enterprise getting runners on the corners in their half of the second, Union got out of the inning without allowing a run to come across.

Enterprise took the lead in the bottom of the fourth. Junior Cade Feltus got Enterprise going with an RBI double into left field to tie the game 1-1. With two outs, Enterprise loaded the bases and scored its second run of the night when freshman Austin Fugler was hit by a pitch.

Union took the lead in the top of the sixth. Eighth grader Jaylon Buckley nailed a RBI triple into deep center. Junior Lane Hanna followed with an RBI single, giving Union the 3-2 lead. Fugler struck out the next two batters to stop the bleeding and kept the game within reach.

Enterprise took the lead in the bottom of the sixth by scoring five runs. Enterprise loaded the bases with one out when sophomore Hunter Richardson hit an RBI single into left field and sophomore Landon Gartman followed with another RBI single. Senior Marvin Butler did his job with an RBI ground out. Enterprise scored two more runs as Feltus walked with the bases loaded and Reese Brocato was hit by a pitch to make the score 7-3 Enterprise.

Union attempted a comeback in the top of the seventh by scoring two runs. Junior Casey Morris hit an RBI double and Buckley followed with an RBI single. Enterprise got the groundout by Hanna, ending Union’s comeback attempt to advance in the next round of the playoffs.

Fugler pitched all sevens innings for Enterprise and picked up the win by striking out 11 batters. Buckley took the loss for Union. Patchin and Austin Tate pitched in relief for Union.

“Austin Fulger pitched a really great game and that gave us a chance. I don’t think we played our best game and we could’ve given up, but didn’t,” Enterprise head coach Cass Brister said. “I’m proud of the way we played, but we got to get better. I’m happy to win the series.”

Enterprise will take on St. Joseph Catholic in round two of the 2A state playoffs on Friday. First pitch is set for 7 p.m.