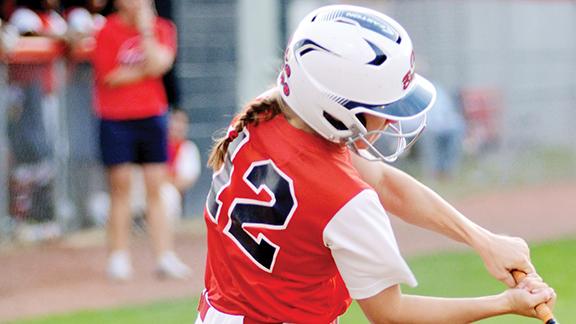 Kat Wallace of Ole Brook (12) swings at a pitch in a game played recently. Wallave went 2-for-4 from the plate with one RBI for the game. (Photo by Dylan Rubino)

Facing a 2-0 deficit with one last chance at a rally in the top of the seventh, the Brookhaven Lady Panthers scored four runs to complete the comeback Tuesday night and took game one 4-2.

The win gives the Lady Panthers the 1-0 series lead with game two at home Thursday night. A win would advance Ole Brook to the 5A quarterfinals to face the winner of Pearl River Central and Long Beach.

Junior Grace Stringer pitched a great game for South Jones and kept the Lady Panthers off the scoreboard for the majority of the game. Stringer pitched the complete seven innings, giving up four runs (three earned) on seven hits, three walks and 12 strikeouts.

South Jones got on the board first in the bottom of the fifth inning with two fielding errors by the Lady Panthers, scoring two runs to make it 2-0 Lady Braves.

After trying to chip away at Stringer and South Jones all game, Ole brook finally got to them and took the lead for good in the top of the seventh.

Sophomore Kat Wallace got things started with an RBI single to center field to score senior Tia Bussey to cut it to 2-1. Senior Macy Ziskin hit a sacrifice fly to score freshman Madi Miller from third to tie the game at 2-2. The Lady Panthers took the lead for god on a line drive from senior Jada Henderson who reached base on an error, which allowed two runs to score and gave Brookhaven the 4-2 lead.

With run support to work with, Fuller set down the Lady Braves in order in the bottom of the seventh to take home the game one victory 4-2.

Wallace and Bussey each had two hits to lead the Lady Panthers. Senior Cheyenne Motley and junior Rileigh Allen each had one RBI to round out the scoring for Ole Brook.

Mackenzie Jones, Madison Jones, Sydney Runnels and Toree Bradley each had a hit for South Jones.

The Lady Panthers had six errors in the field and South Jones had three errors for the game.