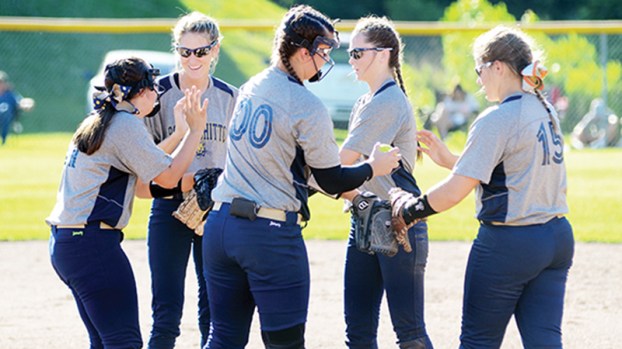 Photo by Dylan Rubino/ The Lady Cats celebrate a big strikeout by Codi Leggett in their 7-0 win over Stringer Thursday.

The Bogue Chitto Lady Cats continued their winning ways in game two of their second round series against Stringer, advancing to the quarterfinals Thursday night with a 7-0 win.

Behind a strong pitching performance from freshman Codi Leggett and timely hitting, the Lady Cats are one step closer to their goal of another state championship.

“It was big getting the win for us,” Bogue Chitto head coach Scott Leggett said. “I felt like we should’ve hit it better than we did, but you have to take them how they are. It was a great win for us.”

Leggett was outstanding on the mound for the Lady Cats. She pitched all seven innings and didn’t allow a single run. Leggett also led Bogue Chitto at the plate, going 3-for-4, including a solo home run in the bottom of the fourth to put Bogue Chitto on the board at 1-0.

The home run was the first for Bogue Chitto all season.

“Codi is really pitching well for us right now, Leggett said. “She got in a groove tonight. She’s focused and she knows she doesn’t have much depth behind her. She’s grown up over this season and she was great from the plate.”

Leggett had ice wrapped around her right knee after the game, as she’s been battling a knee injury for most of the season, but it hasn’t slowed her down yet.

Senior Terrah Nelson also had a big day at the plate for the Lady Cats, going 3-for-4 with a single, double, and a triple.

Nelson had the biggest hit of the evening for Bogue Chitto with a bases-clearing three-run RBI double in the bottom of the sixth to make it 6-0 put the game out of reach.

Sophomore Baileigh Jackson contributed as well from the plate, going 3-for-4 with three singles to put runners on base and extend innings.

After the game was over, the two senior captains, Nelson and Cherie Savoie, were honored on the  mound. They were greeted by teammates, family members and coaches at the mound as the seniors were honored for their hard work and dedication to the Bogue Chitto program.

Tears fell down the faces of Nelson and Savoie as they each sent out pre-recorded messages over the speakers at the park after the game.

One message was clear — win another state title like the two seniors won back in 2014.

“We can certainly do it,” Leggett said. “Those two seniors have done a great job over the years and played a big role for us this year and even last year. We’re definitely going to miss both of them.”

Of the three candidates who want to be mayor of Brookhaven, one is in debt to the IRS for more... read more