When voters go to the polls Tuesday, it could be the most important election they’ll vote in.

Hosemann made the rounds through Brookhaven recently to remind voters the importance of getting to the polls.

“I try to remind people, if you don’t care about fire protection or police protection or your streets or your garbage getting picked up, then don’t vote,” he said.

“But if you care about any of those things and the sense of community that you have, then you should vote.”

Voting is a right that shouldn’t be taken lightly, he said.

“I also remind them that today there are people in Syria, Iraq, Afghanistan so that we can go down the road in our truck and take five minutes to cast our ballot. I’m hopeful that we have a high turnout this year,” he said.

About 100 municipalities throughout the state will have primary elections Tuesday, he said. Some are not contested, and shows people are satisfied with their elected officials.

“You have contested races here for mayor, for aldermen,” Hosemann said. “There’s a lot of reasons for people to go make their selection one way or the other, for the next four years is what they’re doing.”

The Ward 5 race is uncontested. Incumbent Republican Fletcher Grice will keep his seat at the table.

However, Wards 1, 2, 4 and 6 will see new faces no matter who wins. Ward 1 Alderman Randy Belcher, Ward 2 Alderman Terry Bates, Ward 4 Alderwoman Shirley Estes and Ward 6 Alderman David Phillips did not seek re-election for their current positions. Belcher is running for another public office.

At the primaries, if no one gets 50 percent of the vote plus one, there will be a runoff election, which will be May 16.

If there is a runoff, voters must stick with whatever party they voted in the primary. The general election is June 6. It will include the party primary winners and any independent candidates.

Wards 1 and 4 will be decided Tuesday night.

Hosemann said the election process is where the people make their choice for who they best think can represent them on issues.

“The oil that lubricates the engine is personal individual contact, personal dialogue. That starts with your mayor, your board of aldermen, your county board of supervisors. Those people have to have interaction with all of the community to have a consensus to govern,” he said. “Where we’re at is at the platform, where we select the people who are going to reach out to each other and make sure we have a consensus to govern. And it starts with the primaries and ends with the general election. That concept is real important.”

Voters will cast ballots at the following locations:

Wesson will not have a primary election Tuesday because all candidates are running as independents. Voters will cast ballots at June 6 general election. 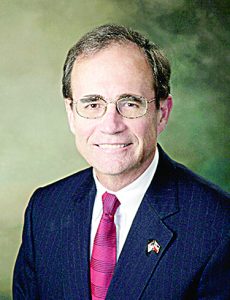 Seven. That was Colton Watson’s lucky number when taking the ACT. It’s also how many times he took the test... read more