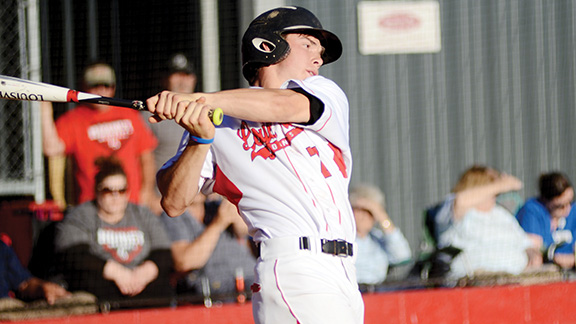 Parker Flowers of Loyd Star swings for the fences in their playoff win over Richton Thursday night. (Photo by Dylan Rubino)

The 2017 baseball season in Lincoln County was headlined by dominant play of some of the schools.

The Loyd Star Hornets looked unbeatable, going undefeated in the regular season at 27-0 and sweeping their opening round playoff series against Bay Springs.

After starting the 2017 season 0-5, the Brookhaven Panthers rebounded nicely and won 17 games in a row to position themselves nicely for the playoffs.

West Lincoln also started the season undefeated at 13-0, but hit a rough patch to end the season, losing their last seven games, including the playoffs.

The best moments of the season came from the best teams in the area.

Ole Brook got off to a rough start to the 2017 season with a 0-5 start, including losses to Lawrence County, Wesson and West Lincoln. Four of those losses came by two runs or less, which showed the competitive nature of Ole Brook by keeping games within close reach.

They rebounded from that rough start and followed up winning 17 games in a row. Part of the change had to deal with the bats getting hot. The Panthers averaged 11 runs per game during their 17-game winning streak and put games out of reach early.

With the team riding high, they faced their toughest game of the season taking on Loyd Star on the road and fell 5-4 in eight innings. The Panthers ended their season losing in the first round of the 5A state playoffs to Long Beach, but the win streak was something that kept Ole Brook near the top of the pack in the area.

It seemed like every game the Enterprise Yellow Jackets played in came down to the wire in thrilling fashion.

The Yellow Jackets played in seven games that were decided by three runs or less, with three of them coming against Lincoln County opponents.

The peak of the excitement came in two moments. Enterprise hosted Loyd Star for a doubleheader back in March, which they lost both games 9-6, but held a lead in each of those games.

The other moment came in the playoffs, where they won their opening series in game three against Union in an up-and-down contest with a 7-5 win. Needing a win in their second round series against St. Joseph to extend their season, the Bruins scored three runs in the bottom of the seventh to get the walk-off win to advance by a score of 5-4 and knocked off the Yellow Jackets.

Enterprise loses three seniors from the 2017 team, but plenty of young players return in 2018 so the Yellow Jackets should have another fun season ahead.

The Loyd Star Hornets proved to be the best baseball team in the area all season long.

Not only did they outscore their opponents 363-70, but their pitching staff shut down opponents with a team 1.66 earned run average. The three-man rotation of junior Cade Hodges, senior Parker Flowers and freshman Tanner Watts went a combined 22-1 overall.

Their lone stumbling block came in the opening game of the second round of the playoffs against Lake, where they were shut out 2-0.

The competition will only get tougher for Loyd Star as they advance to South State to face the winner of Taylorsville and St. Joseph Catholic, but the Hornets have shown no signs of slowing down with pitching depth and a deadly lineup.