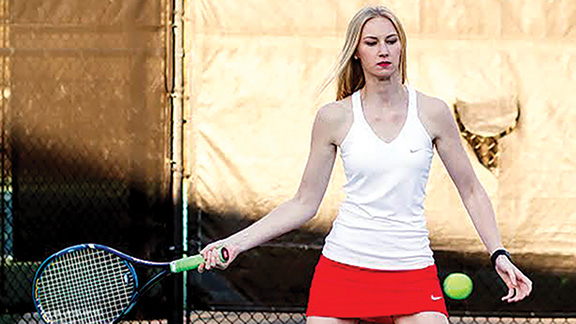 Alice Anne Walker of Brookhaven attempts to hit the ball in a match played earlier this season. Walker and Lea Allen could not win their doubles match in the state tournament in Oxford Monday afternoon. (Photo submitted)

The Panthers competed against the best of the best in the state tournament and came away with a winning record in day one.

The four winning pairs have moved on to the next round with the wins Monday.

In the first match of the day with girls’ doubles, Carlye Cochran of Wayne County defeated Maddalynn Boyte of Brookhaven in straight sets 6-3, 6-3.

In boys’ singles, Daniel Panzica of Brookhaven took down Ramon Jackson of Lainer in straight sets 6-0, 6-2.

In the first boys’ doubles match, Will Moak and Dalton Fortado continued their winning ways and defeated Jonathan Gonzales and Yorch Potentio of Laurel in straight sets 6-4, 7-5. In the second boys’ doubles match, Michael Haynes Hutson and Braxton Wallis of Brookhaven defeated Michael Floyd and Quinton Chase of Center Hill in straight sets 6-2, 6-1.