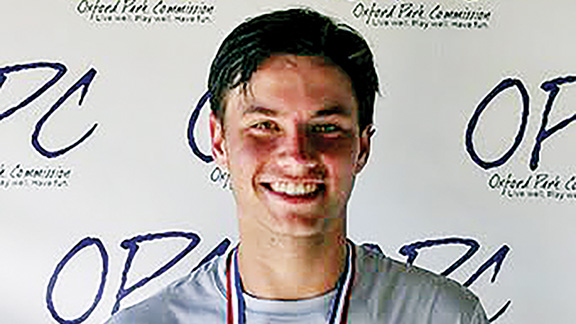 Hours of practice and matches on the local tennis courts finally paid off for Wesson’s Erich Fischer on Wednesday.

He claimed the 3A Boys Singles State Championship in impressive fashion in Oxford at the Mississippi High School Activities Association championships.

Fischer, the son of Louis and Tracy Fischer, plowed through the first three rounds at the tournament without losing a single game against Damien Harbin of Kossuth, Evan Hodum of Alcorn Central, and Brant Mullins of Franklin County. The third seed in the brackets, Fischer won all three of those matches 6-0, 6-0 to set up a championship match against St. Patrick’s Anthony Schloegal, the top seed in the tournament, who only lost two games in the first three rounds.

Fischer found his groove early in the first set and raced ahead of Schloegal to claim a 6-1 victory in the first set. The top-seeded player was not going to give up, and the St. Patrick’s star relied on his strong service game to jump out to a 4-1 advantage in the second set.

Fischer was not to be denied as he won five of the next six games by staying strong, consistent and capitalizing on errors from his opponent to even the score at 6-6 and force a set tiebreaker. Using attacking returns and demonstrating masterful ball placement, Fischer looked to end the match quickly as he raced to a 6-0 match point score.

Once again, St. Patrick’s Schloegal would not give up easily as he won the next four match points and put the large crowd on the edges of their seats at 6-4.

On the final match point, Fischer took a short volley from Schloegal and forced him back behind the baseline to return a lob in Fischer’s direction. Seizing the opportunity, Fischer backpedaled to slam an overhand that forced Schloegal even further off the court. Schloegal’s return cleared the net, but Fischer had approached to put away the point with a cut forehand to the sideline to claim the title as the Wesson crowd erupted in cheers for their champion.

“It’s really an unbelievable feeling,” Fischer said. “To win the championship in my last high school tennis match is pretty dang cool. It’s great to have so many people here and in Wesson who supported me the whole way. This is the best day of my life so far.”

“I could not be more proud of Erich,” Wesson coach Rod Martin said. “No one deserves it more than he does. He and his family have invested so much into this, and this is the perfect- almost storybook- ending to his five years as a member of the Cobras. We are definitely going to miss him next, year, but we are surely going to celebrate him and his amazing achievement while he’s here.”

The West Lincoln track team wrapped up their 2017 season during the 2A track meet over the weekend at Pearl... read more