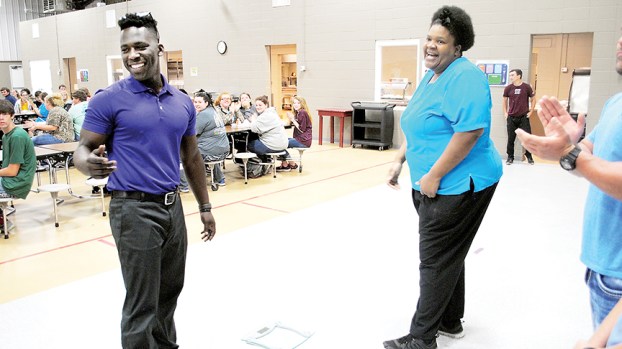 Photo by Matt Rushing/Bernice Johnson, a cook in the the Enterprise Attendance Center cafeteria, weighed herself Monday in front of her students. She was three pounds short of her goal, but plans to continue with her routine of healthy eating and exercise so she can be a positive example to the students there and her own three children. Pictured are, from left: trainer Tra Collins and Bernice Johnson.

‘I don’t want to leave them that soon’: Cook at Enterprise Attendance Center finds diet motivation in mother’s death

Bernice Johnson’s mother died from obesity-related health problems and she didn’t want to follow in her footsteps. So she’s doing something about it.

“She was always a big woman and I’ve always been a bigger woman,” Johnson said.

Johnson’s mom died before her own 60th birthday.

“I have three girls and I don’t want to leave them that soon,” she said.

What makes dieting difficult for the 38-year-old is that she’s spent nearly half her life working in the food service industry. The last five of those have been as a cook at Enterprise Attendance Center.

When her mother died last year, Johnson topped the scales at 430 pounds. Determined not to die from congestive heart failure like her mom, she was ready to make a change.

In September, Johnson started exercising at school. She walked in the gym during her breaks and when the weather was nice, she walked outdoors. Her cafeteria manager sometimes accompanied her and offered motivation. Johnson’s goal was one mile a day to start.

That was her routine until she met Love to Live bootcamp coach Tra Collins, a former Brookhaven firefighter who is determined to create a healthier Lincoln County.

���I was on Facebook and I saw where he posted a Facebook live video of him working out in the park, asking if anyone wanted to come join him. I decided to go and we talked while I was there. He said he was starting a bootcamp and I decided to try it,” she said.

She’s seen great success with Collins as her trainer.

“The pounds have just been melting off,” she said.

“I didn’t know Bernice when I first saw her,” Collins said. “I just knew she wanted to work out. I knew new exercises would challenge her body and shock her muscles. She pushed through. She didn’t care how long it took or if she finished last, she would complete what you asked of her.”

Johnson knew that exercise wouldn’t take care of her problems alone. She also changed her diet and the way she ate.

“I’m a cook, so changing my diet was harder than starting to work out,” she said.

She avoids meat after 4 p.m.

“I may eat some chicken salad but no hamburger meat or steak. I also want to be an example to kids here at the school. I can’t do that unless I’m eating right. I encourage kids to eat fruits and vegetables everyday,” Johnson said.

Seeing Johnson find her healthier self brings a smile to Collins’ face.

“I get joy from seeing her have joy and her getting the recognition and knowing she’s happy with herself,” Collins said.

When Johnson started her journey in September, her goal was to lose 60 pounds by the end of the school year.

This week, she weighed herself during lunchtime in the busy cafeteria at Enterprise Attendance Center. Collins, Principal Terry Brister and a room full of students watched her anxiously step on to the scale. She lost 57 pounds.

Though she was three pounds short of her goal, she’s now down to 373 and continuing on her way to her next goal.

“I just want to be healthy. I want to feel better,” she said. “I want to be able to walk and not have to catch my breath every second.”

Johnson plans to treat herself soon with some new outfits.

“I need to go shopping,” she said. “My clothes are getting bigger.”

She offers this advice for others who want to lose weight:  “One foot in front of the other. Don’t quit.”

Eclectic lofts open soon: The Storm Building is getting some new apartments

The Storm Building, located on the corner of Whitworth Avenue and Cherokee Street in downtown Brookhaven, is home to Janie’s... read more