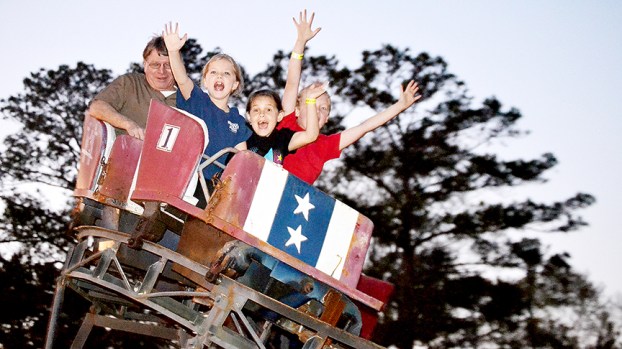 Daily Leader file photo/Fair attendees love the rides, like this group on the roller coaster at a recent Exchange Club Park event.

The Brookhaven Exchange Club plans to kick off school break with its annual summer fair.

Haag’s father was a charter member of the club in Brookhaven, and Haag said they were members together for a few years prior to his father’s death. “My roots run deep here and in the club,” he said.

Haag said club events like the Summer Kickoff mean more to him than just having something to do. It’s a chance to help the community by providing a safe place to have fun, by raising money for the club’s community outreach efforts and by giving non-profit groups a chance to raise funds as well.

The fairground kitchens will be open nightly and will be run by non-profit groups. Non-profits will also be running the game booths already in place at the fair. Haag said booths are still available at no cost to schools, churches and other non-profits.

The club would also like to set up additional 10-foot-by-10-foot spaces throughout the park for approved groups who would like to set up their own booth, he said.

Any groups that operates a booth will keep the proceeds from their efforts, he said.

That’s one way the Exchange Club likes to give back to the community, he said.

Later this year, the Exchange Club’s annual fair will take place. Haag said this year’s format will be a little different however.

In the past, the fair has run for seven days, beginning on a Saturday, closed on Sunday, and open again Monday through Saturday. This year the fair will open on a Thursday evening and run through Saturday — like the Summer Kickoff — then repeat the same days the following week. Though only six days instead of seven, the club believes this format will work better for attendees and the workers.

Booths will also be available for the annual fair at a reasonable rental price, he said. More information about the fair will become available as the date draws closer, Haag said.

Campus to upgrade ‘cage’ to classroom