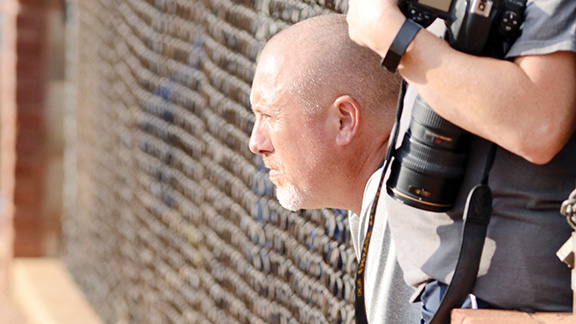 Bogue Chitto head coach Scott Leggett looks on as his team is one out away from claiming their fourth state title in school history. (Photo by Dylan Rubino)

The Bogue Chitto Lady Cats started the 2017 fast pitch softball season 3-4, including losing their first three game by a combined scored of 15-1.

There were no worries with Lady Cats head coach Scott Leggett.

Some of his starters were still in basketball season, including his senior captain Terrah Nelson and he always knew once his players came back, his team would start to roll.

Bogue Chitto went 21-3 the rest of the way, including a 13-game winning streak to end the season and capped it off with a two-game sweep of Hamilton to win their fourth state title in school history.

For the success of his team this season, Bogue Chitto head coach Scott Leggett has been named The Daily Leader Coach of the Year.

“I’m blessed to have the opportunity to coach these girls,” Leggett said. “I’ve told them many times that I wouldn’t want to coach another group. They aren’t perfect, but no player is.”

This team was special for coach Leggett because of the way they helped send off his two seniors Nelson and Cherie Savoie on the right note.

Both Nelson and Savoie have been with the program since they were freshmen and this year was their second state title with the team. They both won titles in their freshman year and end as seniors with another state title.

“Both Terrah and Cherie have been a big part of our program,” Leggett said. “They were fantastic players and will be missed.”

Those are the only two seniors that will be graduating and moving on and the majority of the team returning will consist of freshmen and sophomores.

That’s an opportunity Leggett is looking forward to.

“We have always had younger players step up when it’s their time,” Leggett said. “Our young starters now have a successful season under them and it should help them for next year.”

The majority of the starters return for the upcoming slow pitch season and the 2018 fast pitch season, but this coming school year will be a new challenge.

Bogue Chitto will move up from 1A to 2A starting in the fall, which increases the level of competition they’ll face. In their district, they’ll face Lincoln County opponents Loyd Star, West Lincoln and Enterprise.

“There’s no big changes in our approach,” Leggett said about the move. “We know we have to just keep doing what we have been doing. Keep it simple, have faith and play the game the right way.”

A big part of preparing for this past season was to play their best in district competition. Bogue Chitto responded and went 4-0 in district play and cruised through the playoffs.

“We really focus hard on our district games because they are basically playoff games,” Leggett said. “Other games are important, but we use them to prepare us for the playoffs.”

Leggett has been a part of many special teams during his time at Bogue Chitto. Each team has left a different imprint on his life with each team having a special meaning in his own.

The 2017 Bogue Chitto Lady Cats will have a special place in his heart.

“They all rank number one to me,” Leggett said about his past teams. “Each one has a special meaning because of the different girls winning them for us over the years.”