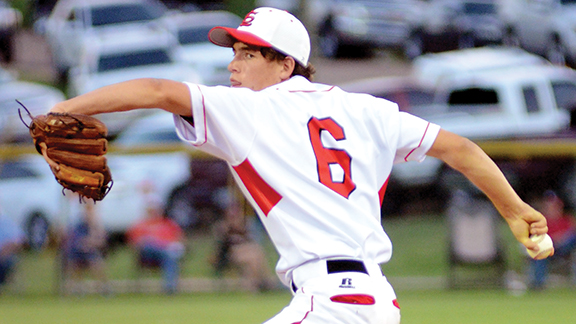 Junior Loyd Star pitcher Cade Hodges pitches in a game played this season. For his performance at the plate and on the mound, Hodges has been named The Daily Leader All-Area MVP. (Photo by Dylan Rubino)

In game one of the 2A state title series against East Union, Hodges was dominant from start to finish, throwing a complete game shutout, only giving up two hits and striking out 13 batters.

A performance like that is nothing new for Hodges. When the stage gets bigger and the lights shine brighter, that’s when Hodges plays his best.

His pitching helped lead Loyd Star to a 37-2 overall record and their first state championship in 37 years.

Hodges finished the season with a 10-1 overall record as a starting pitcher with a 0.88 ERA to go along with it. At the plate, the junior was just as dominant, with a .365 batting average and 38 RBIs. With a fastball in the high 80s and a nasty slider to go along with it, Hodges kept opposing hitters off balance all season long.

For his performance on the field for Loyd Star, Hodges has been named The Daily Leader All-Area MVP.

“Cade has a drive to be good in everything he does,” Loyd Star head coach Jared Britt said. “He works his tail off in the offseason trying to perfect his game. He wants the ball in the big moments. On the mound from your ace, that’s what you want.”

The work ethic and the drive to get better each day has driven Hodges’ game to new heights his junior year.

Having an ace like Hodges to throw every first game of a big series made Britt’s life much easier as a head coach. His performance on the field set an example for the rest of the team each time he stepped on the mound.

“Not only does it make my job easier to be able to coach good players like Cade, but also other guys on the team,” Britt said. “I know what great examples Cade and the older guys on the team set for the younger players on and off the field.”

The example Hodges set on and off the field helped Loyd Star reach back-to-back South State titles and repeat trips to Trustmark Park. The deeper the playoffs went, Hodges just seemed to get better.

With such a stellar junior year, it’s hard to imagine how he can get better, but there’s always room to improve.

Hodges will do more weightlifting to try and put more muscle on and get stronger in the offseason. That’s the main goal to come before he starts his senior year.

As an incoming senior, Hodges will be looked on to be a more vocal leader on the team to replace the seniors that left a strong legacy with a state championship this past season.

The dominant performance from Hodges in his junior year has given him recognition from Division I programs. Multiple schools have come to scout Hodges at Loyd Star to potentially sign him to play baseball on a full athletic scholarship.

The potential is there for Hodges to be a Division I baseball player, but that all can start with an even better year in his final year at Loyd Star.

“If he continues working hard and getting stronger, anything is possible for him,” Britt said.