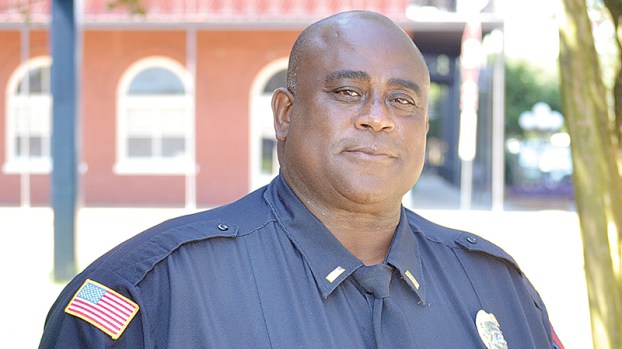 Police lieutenant is the new chief: After 28 years on the force, Kenneth Collins will lead the Brookhaven Police Department

But the man who will be the next chief of police is not one the bad guys should cross. He can go from friendly to fierce in a heartbeat when the situation calls for it.

Collins will be sworn in as chief June 29.

He defeated Republican Jason Gaskin in the general election Tuesday, receiving nearly 59 percent of the vote.

Collins, 53, has spent 28 years with the Brookhaven PD and three years with the Lincoln County Sheriff’s Office. He spent eight years in the 155th Infantry of the Army National Guard, training as a machine gunner and a transport truck driver.

This was his first time to run for police chief.

“I’m a country boy,” he said. “All I ever did was work hard the way my grandmother taught me to do.”

Collins, who is the owner and operator Collins Tree Service, said he’ll put the business on hold for a while so he can concentrate on serving and protecting the people of Brookhaven and running the department.

“It is an awesome responsibility to protect the citizens of Brookhaven and Lincoln County,” he said.

One of Collins’ first acts as chief will be to update the radio system so that BPD will be able to communicate with Lincoln County Sheriff’s Office and Mississippi Highway Patrol in emergencies. In the Memorial Day weekend shootings, police officers could only communicate with sheriff’s deputies through cell phones or by relaying messages through dispatch, he said.

He has talked to Sheriff Steve Rushing and Brookhaven Mayor Joe Cox about getting a radio system that would be compatible.

“I don’t know the reason why it hasn’t been done, but I’m in the process of getting the funding and the support of the mayor and Board of Aldermen to get that done,” he said. “I think that we may be able to make that happen.”

Collins is a big proponent of youth programs and encouraging young people to stay on the straight and narrow path.

He would like to re-introduce the DARE program into Brookhaven schools. He’d talked about it with Lincoln County Sheriff’s Deputy William Durr shortly before he was killed May 27. He said Durr had planned to help set it up at the police department if Collins was elected.

Collins believes reaching the children is paramount to creating a better Brookhaven.

“They are the future of this town,” he said.

His main focus, though, will be the investigation of crimes. Several homicides remain unsolved and he’d like to provide a resolution for the victims’ families. He said officers in his department will be visible throughout the city.

“By getting closer to the community and winning their trust, that will help with those investigations,” he said. “We’ll have to take them one by one and try to bring them to some conclusion.”

Collins wants to keep improving the department’s technology. He’d like to see computers in every patrol car.

He’ll keep cameras on all the cars and officers will continue to wear body cameras when they’re on duty.

“They are a necessity to keep the integrity of the public and the officers,” he said.

He’ll eventually work to get a SWAT (Special Weapons and Tactics) team organized in the police department, which was an idea of his predecessor.

“Before we can go forward, we must fix what’s broke first,” he said.

He wants to focus on communication with other agencies, which will be beneficial for a SWAT team, he said.

“You’ve got to take each step in order. We’re going to have a SWAT team, but that will be later.”

Collins said he is thankful for the voters “that allowed a poor person like me to have his own business and to be the head of a police department. I’m honored to be a citizen of Brookhaven. I wouldn’t want to be anywhere else.”

“When your parents tell you to stay in school, get an education and work hard, God will shine his light on you. That’s so true in the Home Seekers Paradise and the place that I love.”

Getting ready for the sweet summertime: Brookhill on Natchez and Brookhaven Country Club plan summer activities

Lay out the sunscreen, swimsuit and pack a hat. Summer — though not officially here until June 21 — seems to... read more