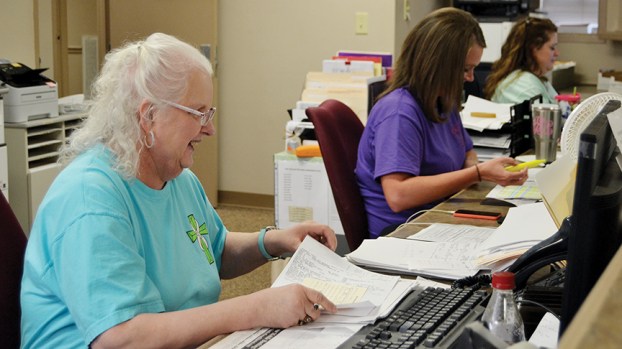 Photo by Donna Campbell/Becky Dixon will retire this month after nearly 32 years as a clerk in the Lincoln County Tax Assessor’s office. Pictured are, from left: Dixon, Cassie Easley and Patti White.

For nearly 32 years, Becky Dixon has been a sort of Sherlock Holmes of the Lincoln County Tax Assessor’s office.

Sometimes it takes a little detective work to assist taxpayers with issues concerning homestead exemption, but after three decades, she’s ready to hand that task over to her coworkers.

A retirement party is planned for Dixon June 30 from 11 a.m. to 2 p.m. at the supervisors’ boardroom at the Lincoln County Government Complex.

Dixon, 64, said to retire was a difficult decision to make. She loves her job. But since her husband is retired, she hopes they’ll be able to travel more. Visiting Virginia is top on her list, just because she’s never been there.

“I want to do what Becky wants to do, not what Becky has to do,” she said.

She moved to Brookhaven in 1986 after marrying Glenn Dixon, who was from this area. She had been working in the Secretary of State’s office in Jackson for 12 years so she brought that expertise to Brookhaven. She’d worked with public land, but homestead exemption laws were like Greek, she said.

It didn’t take her long to catch on though.

Jordan enjoyed her time with Dixon.

“I had the pleasure of working with Becky for a number of years before I was elected and was fortunate enough to have her 12 years,” she said. “She is very kind, soft spoken and the most dedicated employee anyone could ever ask for. We worked so long together that often times we would laugh about finishing each other’s sentences.”

She wishes Dixon joy and happiness with her retirement. “I will be forever grateful for the good job and hard work she did, not only for me, but for Lincoln County,” she said. “Becky will be greatly missed by all.”

Pickering knew Dixon before he was elected as the county’s tax assessor and collector.

“I have only had the pleasure of working with Mrs. Becky for a short time, but like most people in the county, I have known her much longer,” he said. “She has been the consistent fixture of the assessor’s office through four administrations and over that time has touched most of us in one way or another. I cannot say enough good things about her and we will certainly have a a hard time filling her shoes.”