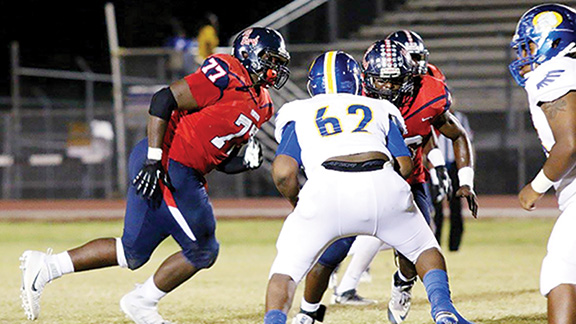 Brookhaven rising senior defensive lineman Jeffery Johnson (77) rushes the passer in their game played last season against Natchez. Johnson is one of the many athletes in the area being recruited by Division I schools. (Photo by April Clopton)

The 2016-2017 school year in Lincoln and Copiah counties has seen many great athletic seasons from multiple teams throughout the area.

Multiple athletes from multiple schools have led their teams to great seasons and have earned recognition for their performances.

That recognition has earned some of these athletes with scholarships to continue their playing days at colleges and universities all across the southeast region of the United States.

Lincoln and Copiah counties and the city of Brookhaven are quickly becoming talent pools for college athletics.

It all starts with the football programs in the area. Brookhaven High School started the trend of playing college football at the Division I level and the recent success has continued into the 2017-2018 school year.

Three rising seniors on the Ole Brook football team are actively being recruited on the Division I level, including defensive back Jemaurian Jones, defensive tackle Jeffery Johnson and offensive lineman Trace Clopton.

Both Johnson and Jones have been two of the most heavily recruited football players Lincoln County has seen since Leo Lewis. Jones has received 25 Division I offers, including Mississippi State and Ole Miss. Jones originally committed to Mississippi State back in February, but de-committed in April to open up his options. Jones recently received offers from Oklahoma and UCLA. Jones finished the 2016 season with 38 total tackles and a team-high four interceptions for the Panthers.

Johnson was a beast up the trenches on the Ole Brook defensive line, earning him 18 Division I offers. Ole Miss and Florida State have been the two front-runners to land the defensive tackle. Johnson had 51 total tackles, two tackles for a loss and a team-high nine sacks for the 2016 season.

As the anchor of the Ole Brook offensive line, it was only a matter of time before the offers started to roll in for Clopton. Clopton recently received his 13th Division I scholarship offer from Florida Atlantic University, adding to his list of potential suitors. Clopton recently attended the Ole Miss Rebels recruiting camp on June 2 and an offer from the Rebels is sure to come soon.

The Brookhaven football program has certainly drawn viewers and scouts to Lincoln County when it comes to football recruiting.

However, it’s not just football that has college scouts coming to the area.

Baseball, softball, tennis and basketball have recruited players from the county.

Burgos announced in February that he committed to play baseball at Southern Miss starting in 2018.

The way Hodges has been pitching for Loyd Star, an opportunity to play Division I baseball will come rolling around by the time his senior year starts.

Football has given Brookhaven a platform for recruiting with college athletics and it’s only a matter of time before the other sports gain more traction.

This is only the beginning for the area when it comes to athletes playing in college.

As the success continues, more opportunities will arise  for the players to shine.

As a new head coach in the area, there are many obstacles Loyd Star head football coach Brian Ford has... read more