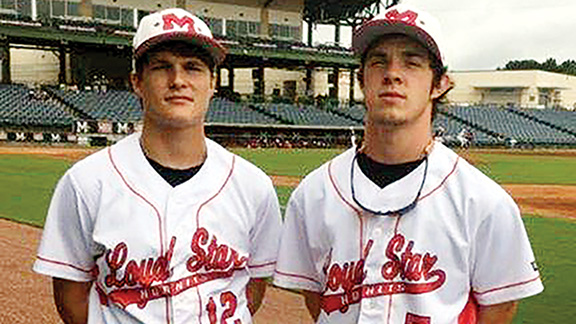 Konner Allen (left) and Parker Flowers (right) pose for a picture before the MAC All-Star Game in Pearl. (Photo submitted)

Parker Flowers and Konner Allen have known each other since the fifth grade.

The two baseball stars were close friends before their winning days with the Hornets and that relationship grew stronger and stronger through the game of baseball.

Their friendship will continue as the two will play college baseball at East Central Community College for the Warriors and head coach Neal Holliman.

“Both of those guys played for a winning program and that’s something we really valued with our baseball program,” Holliman said. “Coming off a state championship run, they both have the opportunity to get even better with us. I was really impressed with the both of them when I sat with them.”

Their relationship started back in the fifth grade when Flowers transferred to Loyd Star from Brookhaven Academy.

As neighbors growing up, Flowers and Allen got off the school bus together and they played in the same yard in the evening into the late hours of the night.

Kim Rothrock, the mother of Konner Allen, recalled those moments as a parent and noticed how their relationship helped them grow over time.

Flowers originally committed to play football at Southern Arkansas University back in February, but the opportunity to continue his baseball career was one he couldn’t pass up.

“I think Parker looked at it and said he had a better future with baseball than football,” Holliman said. “Parker is a great athlete on the football and baseball fields and that’s something we valued when recruiting him.”

Flowers was the first to commit to play baseball for the Warriors and  Holliman soon shifted his attention to recruit Allen.

However, Holliman made it clear to Allen to not make his decision based on his friend, but what was best for his future and for himself.

“When recruiting Konner, I told him not to come here because of his buddy, but to choose independently,” Holliman said. “Don’t choose based on the actions of others. I made that very clear, but I’m glad both of them are joining us.”

Both Allen and Flowers will have at least two more years playing baseball together. From playing against each other in Little League to winning a state championship in their senior years, the two friends will make more memories as they continue their playing careers in college.

“To be able to go with your best friend to the same college and play, what are the odds of that?” Rothrock said. “It makes me feel better that he will be there with someone he knows. I know it’s probably a little scary for both of them, but I’m sure that it helps knowing they will have each other.”

Fishing slowing down in area lakes