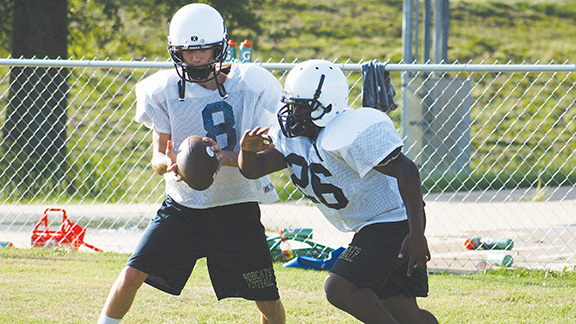 Trey Nettles of Bogue Chitto hands the ball off to teammates Chris Taylor during practice last year. Pictured are, from left: Nettles and Taylor. Nettles is one of the returning players that head coach Garreth Sartin is looking to step up. (File photo)

Bogue Chitto ready for change in 2017

There’s nowhere to go but up for Bogue Chitto football for the 2017 season.

The Bobcats went 0-11 last season including blowout losses to Lincoln County rivals Loyd Star and West Lincoln. The team only scored 123 points on offense and the defense gave up 478 points on the season.

Despite going winless on the season, the Bogue Chitto Bobcats displayed plenty of talent on both sides of the ball. With many of those talented players returning and young players coming in, head coach Garreth Sartin is optimistic for a turnaround season in 2017.

“How last season went is definitely motivating for this season,” Sartin said. “Bogue Chitto has a lot of pride and tradition in all athletics. It’s definitely something that drives us to get better to not have a season like that again. Our older players are ready to step up to be leaders and get us ready for the season.”

To help prepare his team over the summer, Sartin has the players come in for workouts every Monday, Tuesday and Thursday before the season comes around in August. The players start with weightlifting and then transition into conditioning training to end the day.

Sartin wants to see his players compete and push through the heat and humidity of summer to be in top shape when the school year starts.

“It’s very important that the kids are there and competing every day,” Sartin said. “It’s important for the kids to get to know each other and prepare for the season in the heat. It’s a grind over the summer. What happens over the summer tells you a lot about how the season is going to turn out.”

One of the key returning players for Bogue Chitto is rising senior Trey Nettles. Nettles is a crucial player for the Bobcats on both sides of the ball. At quarterback, Nettles passed for 880 yards last season with eight touchdowns and 16 interceptions. Nettles also rushed for 118 yards and two touchdowns. On defense last season, Nettles totaled 46 total tackles and two interceptions in the secondary.

Nettles returns as a leader on both sides of the ball and his role will increase for the 2017 season.

“Trey is a very good football player for us. He’s a tough kid that’s very versatile,” Sartin said. “He adds to the experience on our football team. He’s a very valuable piece of our program.”

On offense, Bogue Chitto returns their top two rushers in rising juniors Lafredrick Dillon and Demarcus Godbolt. The duo combined for almost 400 rushing yards and two touchdowns on the ground.

“I expect Demarcus and Lafredrick to step up in our running game,” Sartin said. “They played a lot for us as freshmen and sophomores. I expect the both of them to have breakout years for us and to be big-time players.”

Sartin is excited about his returning players, but also the younger players coming in to give his team fresh legs.

After a tough season in 2016, making a big jump this season will be a tough task, but Sartin has high expectations for his Bobcats and expects a big leap.

“A realistic goal for us is to get back to the playoffs and get back to where we’re competing for wins every Friday night,” Sartin said. “I expect us to be a much improved football team and to be more competitive under the lights.”

After a standout season, Copiah-Lincoln’s No. 1 singles player earned yet another accolade. Sebastian Osorio, a Bogota, Colombia native, was... read more