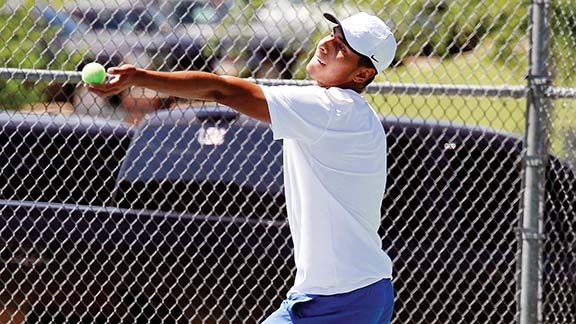 Sebastian Osorio of Co-Lin tennis goes for the serve in a match played earlier this season. (Photo submitted)

After a standout season, Copiah-Lincoln’s No. 1 singles player earned yet another accolade. Sebastian Osorio, a Bogota, Colombia native, was named ITA All-American. The ITA (Intercollegiate Tennis Association) is the governing body of college tennis at all levels.

Osorio finished the 2017 season ranked No. 8 nationally and advanced to the NJCAA National Tournament quarterfinals in Plano, Texas. Osorio is the only MACJC player to receive ITA All-American recognition in 2017.

“This is our first time have an ITA All-American,” said Co-Lin head coach Blake Smith. “Sebastian has brought such positive light to our program and this is an amazing accomplishment…especially as a freshman. Accolades like this just show how hard he works at his game. He went to Plano and played the best tournament of his life, and we are fortunate to have him coming back next year.”

D.C. Greer running for a purpose

D.C. Greer is a decorated man. The U.S. Army veteran and Brookhaven resident of 20 years has competed in the... read more