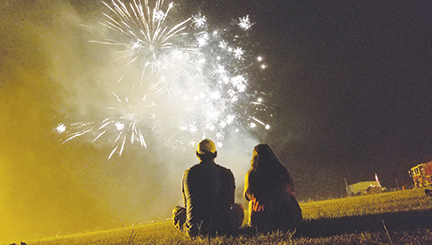 Photo by Donna Campbell/A couple watch the fireworks show last year at the Lincoln Civic Center. The 15-minute show was hosted by Sen. Sally Doty for a second year with help from family, friends and other volunteers. Organizers estimated about 2,100 people attended the free show, which was dedicated to Lincoln County service members. Pictured are, from left: Cody and Julia Ready of Liberty.

For a third consecutive year, a Brookhaven lawmaker is hosting a fireworks show for the Fourth of July.

The event is free and open to the public, said Sen. Sally Doty, R-Brookhaven. It’s held in the grassy area behind the Lincoln Civic Center.

The fireworks show will be synchronized with patriotic music on 102.1 FM. The program will start at 9 p.m. Tuesday.

“The show will last about 15 minutes and will be choreographed to a musical soundtrack that will feature a mix of patriotic favorites and popular favorites,” she said.

Doty hosted the fireworks show in 2015 while she was campaigning for the Legislative seat.

“I thought it would be a fun event,” she said.

It was such a success that first year that she looked to family, friends and business owners to help sponsor it again. She added the radio’s patriotic program to it last year as well.

“It’s music with fireworks. Everybody listens in their car,” she said.

Last year, about 2,100 people attended the event. Doty said about 300 to 400 cars were parked around the civic center with some still arriving as the fireworks show ended.

“We had a big crowd last year,” she said.

She encourages families to arrive early and tailgate.

“Get there a little early, bring some Cokes in a cooler, or a watermelon,” she said. “Enjoy some family time. It’s a nice little time to visit and enjoy fireworks and it closes out the Fourth of July.”

Doty plans to give out glow sticks to the kids again this year. She said parents should be reminded to watch their children well since so many vehicles will be parking.

“It will be dark and there will be lots of cars parking. Please supervise all children carefully,” she said.

The Lincoln Civic Center bathrooms will be open.

A baby cafe’ isn’t a place for infants to hang out and drink coffee. Instead it’s a comfortable place for... read more