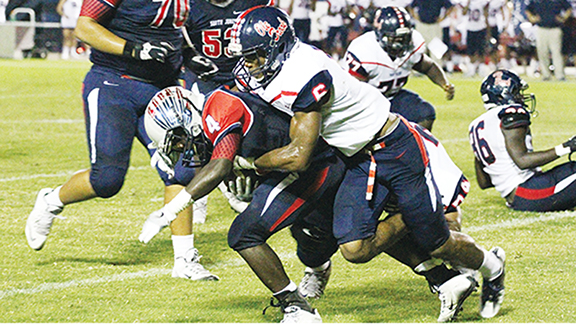 Jemaurian Jones of Brookhaven (6) makes a tackle in their game against South Jones. (File photo)

Brookhaven rising senior defensive back Jemaurian Jones remembers the moment when he knew his football career would take off.

It was June 6, 2015, when Jones attended a scouting combine hosted by the University of Memphis down in Biloxi. Formerly a wide receiver, Jones made the switch to defensive back with the help of the coaches from Memphis, who told him a position change would better his career.

Ever since that combine, Jones has been a different player.

“I was just a regular student in high school. I wasn’t very well known as a football player,” Jones said. “That switch really helped me get recruited by bigger schools and I got bigger in size and strength to get better. I felt like I could be great in college because of that and after that combine, my career took off from there.”

One position change later and Jones has reeled in 25 Division I scholarship offers, most recently from UCLA and Oklahoma.

On Saturday night, Jones announced on his Twitter account the top 10 schools he’s narrowed his decision down to in his recruitment. The list of schools included Ole Miss and Mississippi State.

Jones originally committed to Mississippi State in February, but de-committed as more offers were coming in.

It was a tough decision to narrow his list of schools down to only 10, but it was something that he thought about long and hard.

“It was a very difficult decision, especially narrowing it down from 25 to 10,” Jones said. “You know you’re only going to choose one school. I sat down with my parents over the weekend. We talked about what’s the best situation for me and what’s going to make me a better person and player. I want to pick the right school at the right moment.”

In his junior year for the Ole Brook Panthers, Jones led the secondary with 38 total tackles, 24 of them solo tackles, and a team-high four interceptions.

Even with so many Division I scholarship offers, Jones feels there’s always room for improvement and that starts with being more of a leader.

“I have to be better within myself and I have to become a better leader for this team,” Jones said. “A lot of the younger guys are going to look up to me. I’m going to better myself and better the others around me. I need to be a better teammate and being a better player will come along with that.”

For Jones and the Ole Brook Panthers, the 2016 season came to a disappointing end with a first round playoff loss to Hattiesburg by a score of 42-14.

In his senior year for Brookhaven, Jones wants to get over that hump and make a run in the playoffs.

“We just have to be better on both sides of the ball,” Jones said. “If we just learn how to finish better, we’ll go deeper in the playoffs.”

Being from Brookhaven, Jones has a lot of love for his hometown and making Brookhaven relevant when it comes to high school football means the world to him. As he enters his final season for the Panthers, being one of the best players in the area means he’s doing something right.

“It shows that I’m actually doing something good for my area,” Jones said. “To be named one of the 23 best players in the area, it’s truly a blessing.”