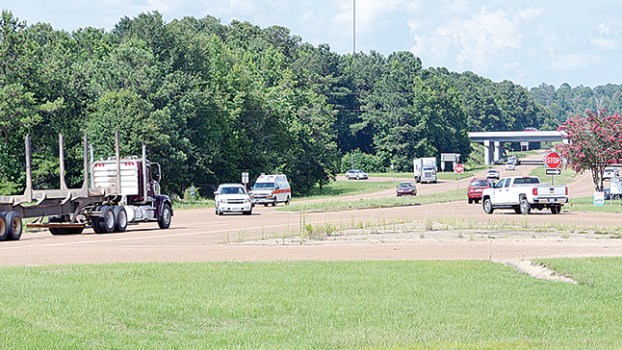 Photo by Brett Campbell/The intersection at Auburn Drive Southwest and Hwy. 84 sees a lot of heavy traffic throughout the day. Lincoln County supervisors say MDOT plans to change that by creating another intersection about 500 feet west on the highway at Cowart Lane, complete with traffic lights.

Traffic is about to change near Chevron Station #306846, otherwise known as 84 Chevron.

During the monthly meeting of the Lincoln County Board of Supervisors on Wednesday, County Engineer Ryan Holmes called attention to news that a new intersection will be built and a traffic signal installed on Hwy. 84 at Cowart Lane. The Mississippi Department of Transportation will build the intersection, repave necessary existing roadways and install the signal.

Auburn Drive Southwest will be reworked from Puckett Machinery to Hwy. 84. The section of Auburn Drive that currently runs from Cowart to the highway will no longer be accessible for through-way traffic, according to Holmes.

Auburn Drive will be cut off behind 84 Chevron just beyond Bozeman Tire and Service Center and Old South Brookhaven Brick. Traffic that currently flows north and south past these businesses will run instead on the other side of the Chevron station, on Cowart Lane.

District 4 supervisor Eddie Brown said he understood that MDOT’s plan has been to change this section of road — with the intention of making traffic flow more smoothly and safely — and then turn it back over to Lincoln County for maintenance. County attorney Bob Allen confirmed this was correct.

“They need to keep all that under MDOT management,” Brown said.

He argued that if the state’s transportation department wanted the roadways reworked, they should have the burden of responsibility for maintenance. He asked Allen to check into the issue and inform the state of the county’s position.

The supervisors were all in agreement on the issue.

The board will have a meeting Monday at 9 a.m. to go over the past month’s claims docket and any business that may come up.

They plan to meet for a work session about county bridges July 24 at 9 a.m.

• The board approved removing certain items from inventory because they were broken or no longer able to be used. Items included a radio, a stun gun, a fingerprinting machine and a voting machine.

• The board approved leasing one acre of 16th-section land to AT&T for a switch box center, as long as the company keeps the land well-marked and well-maintained.

• The board approved a request from the 911 address office to remove a silver Dodge Dakota from its inventory, since the vehicle is no longer being used by the office. The board also approved adding the vehicle to the inventory of District 2 under the supervision of Bobby Watts.

• The board approved a request to remove trees along Weeks Lane on the condition that the property owner give the right-of-way along the road to the county.

• In executive session, the board accepted the resignation of a road crew employee who was hired two weeks ago. The board also discussed interviewing the employee’s replacement.

• The board approved the 2018 fiscal year’s bridge inspection program, presented by Holmes. Holmes confirmed that inspections can no longer be performed on wooden bridges.

Officer turns the page with retirement

Fred Daniel, a man of service looking to better his community, is ready for the next chapter in his life.... read more