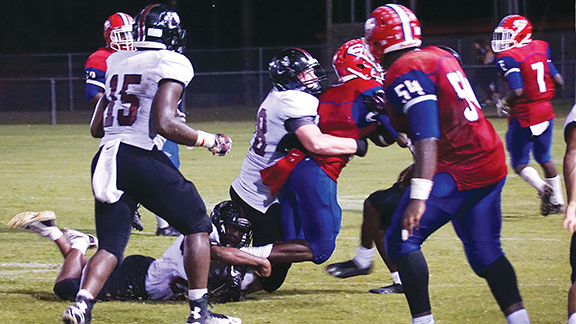 Oliver Moreman of Lawrence County (58) makes the tackle during a game played last season. Moreman finished the 2016 season with 42 tackles, all of them solo tackles, and 12 tackles for a loss. (File photo)

Lawrence County rising junior Oliver Moreman has played for the Cougars under head coach Jaymie Palmer since he was a freshman.

His sophomore season in 2016 was his best one yet, totaling 42 tackles, all of which were solo tackles, and had 12 tackles for a loss, which was second on the team.

The leadership role has increased every season for Moreman and with a fairly new team in 2017, the two-way player will be called upon more than ever.

“I’m just usually helping the team in any way I can on the field, but now there’s going to be more to it,” Moreman said.

“He works extremely hard for us and he plays with a motor, especially on defense,” Palmer said. “He’s always been a leader for us. He’s a hard worker and he works hard in the weight room and in conditioning drills. He’s just a really good kid that works hard.”

Conditioning is important to Moreman, especially as a two-way player and that has been a major factor in preparing for the upcoming season.

“I think he understands the importance of being in the weight room and during conditioning,” Palmer said. “He needs to be in great condition in order to play both sides of the ball. He uses his hands well and he uses his leverage well. He’s very physical at the point of attack and has a large motor to him.”

“I do get tired late in games sometimes, but the coaches really prepare us for those moments,” Moreman said. “The adrenaline kicks in and you just go. It’s a blessing to have the opportunity and the talent to do that.”

Lawrence County will look like a different team when this season starts with 16 players having graduated from last year’s team. There are big losses on both sides of the ball, including quarterback Charl’tez Nunnery, running back Quitten Brown, tight end and defensive lineman Marcus Atterberry, linebacker Azar Myles and more.

With a fairly new roster, Moreman will be looked upon to lead a young, but talented team in the fall.

“He’s obviously one of our leaders,” Palmer said. “We’re hoping he can be more vocal, but he’s really going to get it going this year.”

Playing both offense and defense the majority of the snaps means you have to be a great football player. Moreman has proven to be that for Lawrence County since he entered as a freshman and more is going to be expected of him now that his leadership role is expanding on the team.

“I love Oliver. He’s a great kid,” Palmer said. “He’s always going to speak and he’ll give you a fist bump. He’s going to talk to every coach before he leaves. He’s just a super nice kid.”

“Each of the coaches have treated me like a son,” Moreman said. “I love them and they love me just as much.”

Moreman has confidence in his team entering the upcoming season and envisions a better season than last year.

“We can go deep in the playoffs this year,” Moreman said. “Everybody needs to do their part.”

This is the first appearance in the Primetime 23 for the junior, which is something he’ll remember for the rest of his life and will look to build upon for this season.

“It’s an honor because I’ve never been a part of something like this before,” Moreman said. “I’m just ready to get to work.”

Area fishing starting to pick up