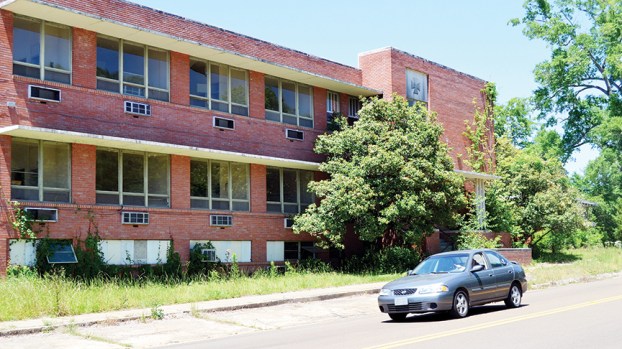 The new alderwoman for Ward 6 wants to see the corner of North Jackson and West Congress streets cleared of the dilapidated hospital that has sat vacant there for years.

But how to make that happen remains up in the air, attorney Shelley Harrigill said.

Before Harrigill even won the election to replace David Phillips for the Ward 6 spot, she was looking into what the Brookhaven Board of Aldermen could do with that privately-owned property.

The three-story hospital with busted windows and a weed-covered lot was once home to King’s Daughters Hospital. It was built in 1922 by the Willing Hearts Circle as an upgrade to the original hospital on Chickasaw Street. But the hospital would continue to grow, and it would eventually move into a new facility on Hwy. 51 in 1964.

In the 1920s the high toxicity of asbestos was not commonly known, and it’s possibly present in the building.

Brookhaven Building Inspector David Fearn said the type of paint used back then had lead in it so it’s likely that paint with lead in it was used. He said there is also probably asbestos in the tile on the floor.

The Mississippi Department of Environmental Quality last year told Fearn they don’t regulate lead paint if the building is demolished, only if it is rehabilitated.

Fearn told aldermen last year that the structure would need to be tested for asbestos through an abestos abatement company. Fearn estimates it would cost between $800,000 to $1 million if asbestos is found in it because it would need to be disposed of in the proper facilities.

Mayor Joe Cox said has said because the property is privately owned it requires due process of law and statutory guidelines to take it down. That process requires notice and a hearing before the city can act, he said. After the hearing, the city may proceed to demolish the property or the landowner can carry out a plan to restore and utilize the property.

But if the city decides to tear the building down, the city would bear the full cost of demolition and debris removal from the premises to a licensed landfill according to the law. The cost to the city would be prohibitive, he said.

The city could file a lien against the property to hopefully recoup expenses in the event the property eventually sells, but that process often fails to regain the total funds spent to to remove the building, he said.

Cox said he has expressed concerns over the condition of the property with the owner.

“We have asked him to provide us with his plans for the restoration and use of the property but have not received any data,” he said.

Harrigill said she wants “more than anything to see this area restored to use.”

However, she also doesn’t think restoring the building is a realistic goal.

“The current structure is obviously in bad shape and now is a health hazard needing to be treated for asbestos, and for that reason I think that the best and safest option is to tear the building down and let the empty lots of land be sold and reused,” she told The Daily Leader in a questionnaire concerning the issue prior to her election.

She said then that grants could be available to help the owner demolish the building safely.

“I would like to see us explore that to help him make the best use of this city property, but obviously it is going to take a joint effort to explore the options and together decide what should be done, because up to the present date the current owner has not been motivated to do anything and perhaps it is because he does not know where to start, however, if nothing can be done to help the existing owner to use or repurpose the building as it stands, then the property needs to be added to the list of properties to be torn down and the property owner assessed for the cost of the clean-up.”

Since her election, Harrigill has discovered that even that wouldn’t be a viable solution.

The cost, like Cox said, would be too high and the city can’t put that burden on taxpayers.

“It’s the biggest mess,” she said. “I wish he (the owner) would just do what needs to be done and sell it.”

Harrigill said the city can’t test for asbestos because it’s a private property and if it does have asbestos, it can’t hire someone to clean it up because of the price and the liability.

“The city can’t endanger itself,” she said. “Why can’t he (the owner) just tear it down? He’s not helping anybody. He’s not obligated to do something. We just want it done. I would love to see it gone.”

Dozens arrested in drug busts: Some buys were made in Lincoln County during the 18-month investigation