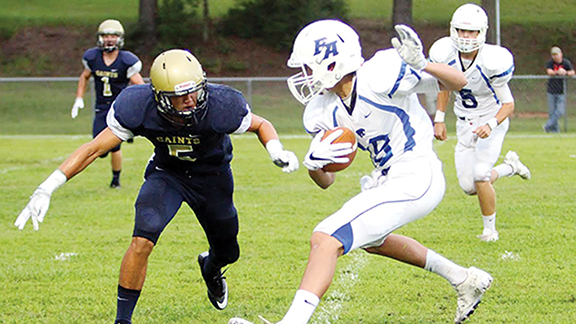 The 2016 season was already heading for the worst with a 0-8 start.

With only 15 players on the roster last season, injuries cut the year short. The Cougars did not have enough players to finish the season and had to forfeit the final two games.

That painful feeling still lives with Brown and it motivates him to make himself and his teammates better.

“It made us all mad,” Brown said about last year. “When coach Ron (Rushing) came in and told us we had to forfeit the last two games, we were crushed. We had to do what was best for us and the team, so we had to end it. Coach Ron always has faith in us and he always believed in us.”

Rushing has a lot of faith in Brown to lead the Brookhaven Academy Cougars in the upcoming season, earning him a spot in the Primetime 23.

“He brings a lot to the table. He works extremely hard,” Rushing said. “He’s gotten faster and stronger this offseason. With his athletic ability and good hands, he will be a scoring threat when he touches the ball.”

“I was very surprised I made the Primetime 23, but honored,” Brown said. “Coming off a year like last year we had as a team, I thought it was surprising. I’m thankful for coach Rushing, my teammates and this opportunity that I have.”

Despite the season being cut short, Brown had a solid season at the wide receiver position. The standout pass-catcher reeled in 25 catches for 412 yards and four touchdowns.

Brown credited his success to his relationship with starting quarterback Keegan Smith, but Brown feels like he can have an even better season with a full roster in 2017.

“I just had a great quarterback that could give me the ball and spread the ball around in our offense,” Brown said. “We have a full roster this coming year and we’re moving up a division, so hopefully we’re going to have another shot at it.”

Rushing has recruited a new roster with 35 players listed for the upcoming season, so expectations are sure to change.

“We should have a really good shot with all the new players, so I’m really excited,” Brown said. “Us moving up also give us a chance to compete against really good competition. We’ve been doing really well in 7-on-7 as well.”

Brookhaven Academy will have a completely new look for the upcoming season with players on the roster coming from other successful sports team within the school. Some players to join the football team include Ethan Nations, Tate Felder, Luke Jackson, Dawson Flowers and many more.

Bringing in the success from other athletics teams is something Brown and Rushing hope can turn Brookhaven Academy football around.

“I really want to make the playoffs,” Brown said. “I really think we have the team to do it. We just have to come together and make it happen. We’ve been competing well with all of the other schools over the summer. We should be able to run the ball really well with our offensive line this season.”

“We’re looking forward to those guys from other sports playing football for us,” Rushing said. “Some of these guys can really be vocal leaders for us and they’re really athletic.”

On July 2, Dickerson was voted into the MLB All-Star Game for the first time in his Major League career.

Brown looks up to Dickerson as a role model and recalls the days of watching Dickerson play on the football and baseball field, hoping some day to make it big like the former Cougar star.

“He’s a role model to me,” Brown said. “When he was a senior and I was in grade school, I remember running out on the field with him when he was getting ready to play football and baseball. It’s special watching him and he’s someone that inspires me.”