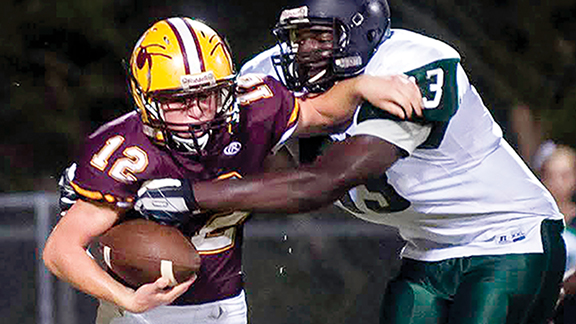 Tanner Waldrop of Enterprise (12) fights off a defender in a game played last season. (File photo)

Enterprise rising senior Tanner Waldrop has been a two-way star for the Yellow Jackets for a while now.

The running back and defensive back has had a starting role on Enterprise since his sophomore year and has shined on the field ever since.

Where Waldrop gets most of the work is on offense in the backfield. During his sophomore season in 2015, Waldrop rushed for 1,015 yards and 11 touchdowns on 97 carries. Last season in his junior campaign, Waldrop split the majority of the carries with quarterback Zach Hodges and fellow running back Darren Richardson. The trio combined to rush for 1,727 yards and 14 touchdowns on the ground.

With Waldrop and Richardson returning for one last go-around, expect more of the same for the Enterprise ground game.

“Our offensive line did a very good job and they allowed us to be able to get the yards,” Waldrop said. “We have to work as much as possible and focus on getting yards each carry.”

Waldrop rushed for 547 yards and five touchdowns for the season and was third on the team in rushing. At defensive back, Waldrop had 37 total tackles, 23 of them solo tackles, and two interceptions for the season.

This is the first appearance on the Primetime 23 for the rising senior from Enterprise.

“Being chosen for the Primetime 23 means a lot to me,” Waldrop said. “It just shows that hard work pays off.”

Enterprise got off to a good start in the 2016 season with a 3-2 record, including wins over Ethel, McLaurin and Lincoln County rival Bogue Chitto. The Yellow Jackets stumbled down the stretch and lost their last fives games of the season, including a loss in the first round of the playoffs to Amite County by a score of 46-21.

It was a disappointing end to a season that looked promising. As a leader, Waldrop wants his teammates to learn from their mistakes and make themselves better because of how last season ended.

“I think our team got complacent with ourselves,” Waldrop said. “We just need to work hard every week and get better every single day throughout the season.”

Waldrop was also a star on the baseball field for the Yellow Jackets and led the team with a .410 batting average, 34 hits and three home runs on the season.

Being a two-way player for a small 2A school, being in the best shape possible is key for playing the entire season. Waldrop knew that coming into the 2016 season and is always finding a way to improve as a football player for the next season.

Waldrop is a perfectionist and tries to find different ways to make himself better.

“I’m trying to get bigger, faster and stronger this offseason,” Waldrop said. “Speed has been the main thing so far over the summer.”

What stood out to Waldrop and Enterprise with how they ended last season was not just losing their final five games, but four of those five games were against district opponents, going 0-4 in district play.

The sting of not winning a district game and finishing the last five games of the season is still fresh in the mind of the players.

That’s one of the many motivating factors for the Enterprise Yellow Jackets entering the 2017 season.

With one more season for Waldrop, he expects change for the Yellow Jackets and from his own play.

“I believe you can expect a lot out of our football team this year,” Waldrop said. “Our main goal for the year is to make the playoffs and if that happens, we’ll take it from there.”