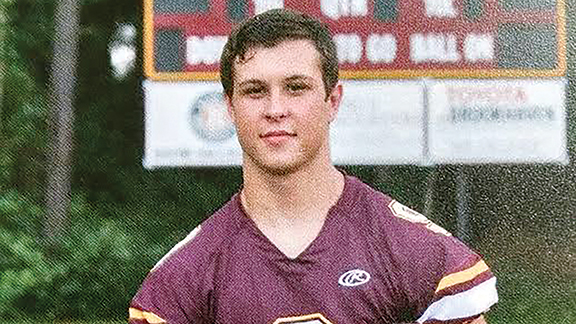 It takes a lot of trust to play a freshman on defense in his first year on the varsity football team.

Last year as a freshman, Taylor Young started at linebacker/defensive end for Enterprise and was second on the team with 53 total tackles on the season.

Entering his sophomore year, Young will have an even bigger role on the defense and will replace leading tackler Devon Kirtfield as the leader on defense.

Young believes he’s good enough to fill that role and looks for the opportunity to prove himself once again.

“I knew I could work just as hard as the junior and seniors on the team and I guess the coaches trusted me enough to do that,” Young said. “I play with heart and passion because I love the game of football and I always try to do my best.”

Coming into Enterprise as a freshman at 14 years old, Young went up against the juniors and seniors and held his own.

His confidence built up from there and he was ready to play immediately for the Yellow Jackets.

“I realized there that I could do something with the game of football at that point,” Young said. “When I went against those guys, I knew I could be pretty good at football. Luckily, I got the shot to play.”

Getting that shot to play with the upperclassmen at the varsity level was a chance Young knew he couldn’t waste and he made the most of it by competing every snap on defense.

“The adrenaline rush I got from playing as a freshman was amazing,” Young said. “It was great going against bigger, faster and stronger competition. Playing against those guys helped prove to myself that I could compete with anyone.”

Young has been preparing this offseason to get faster and to be in better shape for the opportunity playing offense and defense.

“You definitely get tired at some points playing both ways, but I honestly wouldn’t have it any other way,” Young said. “I push myself every day do to better and get better. I’m glad I get to play both sides and I’ll do whatever I can to make the team better.”

Enterprise started the 2016 season with a 3-2 overall record, but faltered down the stretch and lost their last five games of the year.

As a competitor, Young was frustrated with how the season ended.

“It was just frustrating and unfortunate,” Young said. “People started blaming each other and as a result, we lost those games towards the end. We’re working to make sure that never happens again.”

An emphasis was put on the offseason to improve team chemistry and the leaders, including Young, will be in charge of keeping the players together.

So far in the offseason, Young has noticed his team pulling closer together.

“We are definitely getting closer together as a team,” Young said. “I feel like the leaders of the team are doing a great job of building the team up. As a leader myself, I’m working every day to make others around me better.”

As a leader and one of the more productive players on defense, Young has made the Primetime 23 for the first time.

“I’m definitely proud of this. It’s a big honor to make the Primetime 23,” Young said. “I’m just thankful for my teammates and coaches that believed in me from the start. I’m ready to get to work.”

Area fishing is getting better