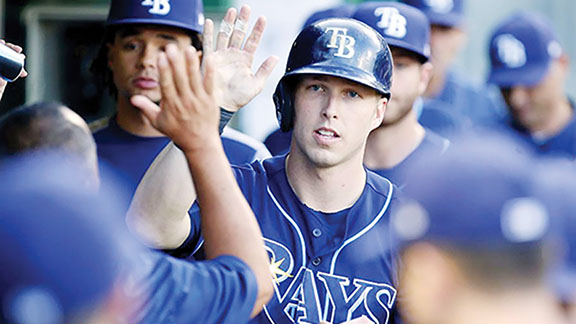 Dickerson reflects on career, being an All-Star

Tuesday, July 11, is a day that Brookhaven Academy alum Corey Dickerson will remember for the rest of his life.

Dickerson had to wait an inning to get his first at-bat in the 2017 MLB All-Star Game at Marlins Park in Miami, Florida. As he stepped into the batters box for the first time in the top of the second inning, facing Philadelphia Phillies reliever Pat Neshek, Dickerson couldn’t help but reflect on where he came from to get to this point in his career.

“The coolest part was getting in the box and seeing former teammates and stars in the league that I watched when I was growing up and I played against,” Dickerson said. “It was pretty cool to take that in.”

Dickerson went 0-for-2 at the plate with a fly out in the second inning and striking out against Cardinals ace Carlos Martinez in the fourth inning.

The majority of the time in Miami for Dickerson revolved around doing rounds with the media and spending time with the fans and signing autographs.

Playing in the game just came natural for all the players and the game itself seemed easy.

There was no stretching, no practicing, and all that needed to happen was just playing in the game.

“There was no anticipation really,” Dickerson said. “There were a couple of butterflies. We play in front of big crowds all the time, but the whole experience of being there was just surreal.”

Dickerson is on pace to have the best season of his career this year with a .311 batting average, 17 home runs and 42 RBIs so far.

He credits his success this season with finding new ways to take care of his body, being more committed to staying in shape and learning how the human body works.

“I lost 25 pounds in the offseason and I was able to move better,” Dickerson said. “I incorporated some new things into my swing and with how my body should move. It was really about finding a new routine. When I found a routine that worked for me, I took it into the season.”

Dickerson got the call Sunday, July 2 when he found out he won the fan vote to be named a starter for the American League in the 2017 All-Star Game.

Dickerson called it the biggest accomplishment of his career along with making his debut in the Major Leagues.

“To be somebody that has done well, but never had the big name and winning the fan vote over Nelson Cruz, who’s a five-time All Star, meant a lot,” Dickerson said. “It’s pretty cool because I know how small of a town I came from. It takes a lot of work and a lot of dedication, sacrifice and stuff to put in all the hard work. When it starts to pay off, it’s very rewarding.”

No matter how big the fame got or how good of a baseball player he became, Dickerson never forgets where he came from.

As soon as he stepped on campus, former BA head baseball coach Stephen Cooksey welcomed Dickerson into his program and knew he had the potential from the start.

“I never really worked at my craft because I was always playing the next sport, but when I came over to BA, (Stephen) Cooksey put my name out there and tried to get me to practice more with guys I can work with,” Dickerson said. “They gave me confidence from the start and they helped me get to where I am today.”

The spotlight and the fame of being a professional athlete can change a person for the better or worse, especially with the success Dickerson is having.

The glitz and glamour hasn’t changed the Brookhaven Academy alum one bit as he carries his core values with him to this day.

“I think I’m really down-to-earth and a humble person that likes to communicate with whoever,” Dickerson said. “I’m pretty much the same guy. All my friends know who I am and if anybody ever needs me, I’m always there.”

The Tampa Bay Rays currently sit in second place in the American League East division and only two games behind the Boston Red Sox.

The process remains the same for Dickerson and with the team. Just stay consistent and keep doing what you’re doing and success will come along with that.

The Primetime 23 recognizes the 23 best football players for the 2017 football season in the area. As the two... read more