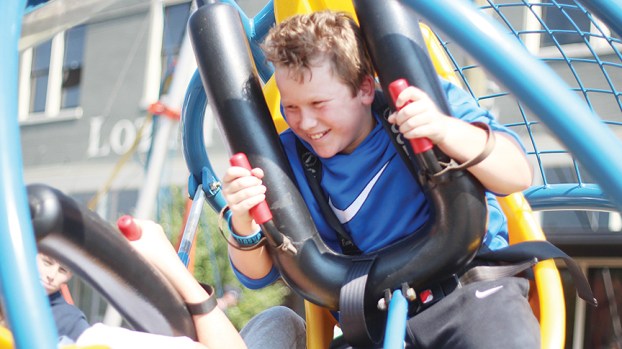 Daily Leader file photo/Rides were one of the attractions at the Ole Brook Festival in 2016. The Brookhaven-Lincoln County Chamber of Commerce estimated a crowd of 10,000 to 12,000 festival goers visited downtown during the festival last year.

The 43rd annual Ole Brook Festival is still more than two months away, but the deadline to reserve vendor spaces without a late fee is fast approaching.

The festival will be Oct. 7 in downtown Brookhaven.

The 2016 event brought in more than 10,000 people for the daylong event. Just over 200 vendors were set up along Whitworth and Railroad avenues and Cherokee Street.

“Last year, we estimated a crowd of 10,000 to 12,000 festival goers,” said Katie Nations, program director for the Brookhaven-Lincoln County Chamber of Commerce.

“We’ve got an exciting new Kidzone set up,” she said.

Children will be able to jump, ride and climb all day in the kids area for a $10 arm band.

The Sam Mooney Band will be the opening act for the Ole Brook kickoff concert at 6 p.m. Oct. 6.

Mooney, who was born and raised as one of seven children in Brookhaven, started playing piano at 8 years old. According to his website, sammooneymusic.com, he was was greatly influenced by the music of his home region. His CD collection as a child consisted primarily of early R&B pioneers such as Ray Charles, Dr. John and B.B. King. The influence of these artists can still be heard in Mooney’s distinctively soulful vocals and piano playing.

He started writing instrumental blues piano jams as a teen, but as his exposure to the wider world of music continued to grow, he began to write songs in almost every genre.

He’s been touring regionally for several years and is a marketing communications major at University of Mississippi. He’s recorded two CDs, which are available for sale at Brookhaven Music and Sound.

Grammy-nominated blues musician Vasti Jackson, a 2012 Mississippi Musicians Hall of Fame inductee, will be the headliner.

A banquet dinner to honor the eight victims killed in Lincoln County over the Memorial Day weekend is set for... read more