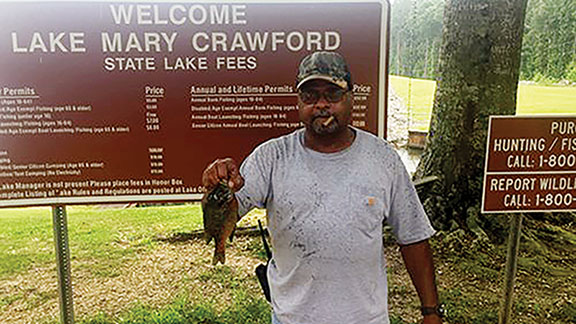 William Bennett of Monticello caught a 0.9 lbs. Bluegill at Lake Mary Crawford this week, which is a new record at Mary Crawford. (Photo submitted)

Lake Mary Crawford is being drained for renovation. All creel limits have been lifted, but all other laws still apply. Anglers must have a valid fishing license, pay the state lake fee and only rod and reel may be used to harvest fish.

Bass fishing is good. The bass are schooled up and biting well. One angler caught his limit Friday and another had good luck on Saturday. Two bass over four pounds were caught at a recent fruit jar tournament. Black or junebug colored worms are the best lures right now. Target shallow and medium depths.

Catfishing is good. Mary Crawford has some nice catfish in it. Two big fish were caught recently on ham. Also try cutbait, worms or commercial catfish bait on the bottom.

Bass are schooling and biting well. Try topwater lures, soft plastics and spinnerbaits in shallow water in the grass and also around the willow trees.

Bream fishing has slowed a bit, but some are still being caught. One angler caught 70 in two days during the full moon. Try fishing in about four feet of water around the banks. Redworms and crickets are working the best.

The catfish bite has picked up and anglers are having success on cutbait and worms.

No current reports on bass fishing. Try top water lures early in the morning or late in the evening, and soft plastics in shallow and medium depths.

Dickerson reflects on career, being an All-Star

Tuesday, July 11, is a day that Brookhaven Academy alum Corey Dickerson will remember for the rest of his life.... read more