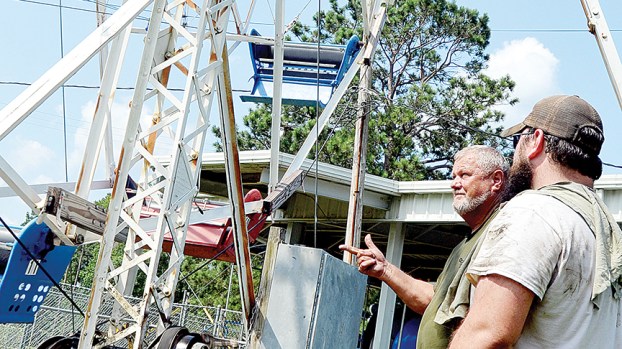 Photo by Donna Campbell/Members of the Brookhaven Exchange Club spent Friday getting the rides, like the Ferris Wheel, ready for the annual fair. Pictured are, from left, member Mike Walley and Justin Watts, a welder with B&O Machine in Brookhaven.

A 65-year-old Brookhaven tradition is gearing up for another run.

And for the first time, the Exchange Club Fair will be spread out over two weekends, said fair chairman Steve Smith.

The fair begins Thursday and will be open Friday and Saturday (July 29.) Then it will be open again Aug. 3-5.

The traditional fireworks display lights up the sky on the final night soon after the last ride closes, Smith said.

“We use that to close our week out and to make a big grand finale of it,” he said.

Parking and admission is free, but there is a charge for food, games and rides. A $10 bracelet can be purchased each night for unlimited rides.

The service organization estimates about 10,000 people came to the fair last year. Many of those were the same people who made multiple visits, Smith said.

The fair is the Exchange Club’s biggest fundraiser and allows them to provide scholarships and donations to worthwhile charities.

Last year, the club turned over the food booths and games to other organizations who run the booths and keep the money they raise. That frees up Exchange Club members to be able to operate the rides.

The Exchange Club also opens the fair for two days at spring break, billing it as a spring fling, and they also had a summer kickoff fair over one weekend.

But the Exchange Club Fair is different. It’s a family tradition that’s been going on for 65 years.

“We still get a lot of people who come back just for the fair,” he said. “A lot of my old classmates, I only see them at the fair. They’ll bring their families, and their grandkids for the fair.”

Part of that tradition is the rides.

The Scrambler is a favorite. The club added it in the 1960s. Then there’s the Ferris Wheel, and a 1930s-model carousel that club members repainted and renovated in 2013. The 30 metal horses were hand-painted by members, who put in about 300 hours to get the job done.

The kiddie cars were the club’s project this year. They were repainted and look sleek, Smith said.

The rides the club has acquired over the years span decades, but Smith said they are well maintained.

Some of the money earned from the fair is used to maintain Exchange Club Park, but Smith said the rest goes to the community through scholarships and donations to other groups.

The Exchange Club also concludes its raffle ticket sales during the two fair weekends. They are giving away a 2017 Honda Rancher 4-wheeler and trailer on the last night of the fair. Tickets are $5 each or four for $10. The money raised from the yearlong fundraiser goes to a child abuse prevention program the Exchange Club helps fund, Smith said.