Funeral services for David Marshall Smith, of Brookhaven, are Sunday, July 30, 2017, at 2 p.m. at Central Baptist Church in Brookhaven with burial at New Prospect Baptist Church cemetery. Rev. Ryan Thruman will officiate the service. Riverwood Family Funeral Service in Brookhaven is in charge of arrangements.

Mr. Smith, 58, died Tuesday, July 25, 2017 after a valiant battle against cancer. He was born in New River, North Carolina, to William Terrell and Sue Marshall Smith who lived the migrating lifestyle of a U.S. Marine. He graduated from Sprayberry High School in Marietta, Georgia, where he became Georgia State Jr. Olympic Wrestling Champion and met his lovely wife, Janet Mathis. After graduating, he relocated to Brookhaven, where his family roots began. He married Janet Mathis of Marietta, Georgia in the fall of 1978, and has lived here for 39 years. He had a long and well-respected career as a derrickman and mechanic in the offshore oil industry and was later employed with Chevron Oil Company as lead mechanic for Main Pass 41 where he enjoyed the remaining years of his employment.

He was a pillar of the community, and a longtime member of Central Baptist Church where he served as a deacon, Sunday School teacher, and a member of the Men’s Brotherhood. He also served with the Brookhaven Exchange Club, and was the president of the Lincoln County Chapter of the Chevron Retirement Association.

Serving his community as a committed follower of Christ, David had a natural ability to connect with others in a meaningful and positive way that none of us will forget. Most of us can recall a time or experience shared with him typically ending in laughter or a wide grin on our faces. As a big man with an even bigger spirit and candid sense of humor, he could even at times be a “big” storyteller. He cherished the time he spent in nature enjoying talking with the Spirit of the Lord as he worked at his farm, a place to have celebrations and share with family and friends. He was loved dearly by his family and friends, and all that knew him will cherish the memories he has left behind. We ask you to keep his spirit at the forefront of your mind by sharing your memories of David for years to come.

To express your thoughts to the family, visit riverwoodfamily.com and click on her name to leave a comment. 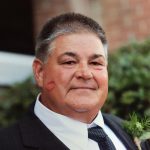