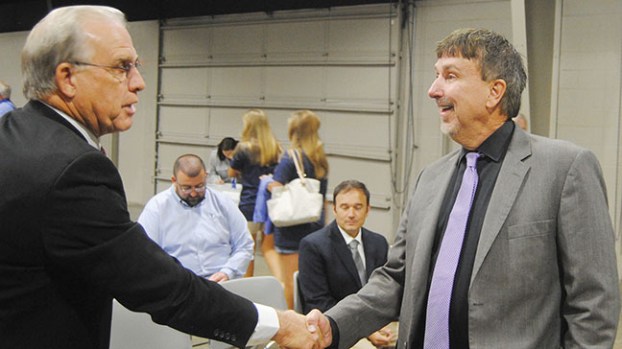 Lincoln County superintendent on a mission

Educators in Lincoln County are on a mission.

Mission 588 is to remind school officials that the district needs to score at least 588 on the state Department of Education’s accountability rating to earn a B grade. Though West Lincoln earned a B grade when the results were released in October, the other three attendance centers — Loyd Star, Bogue Chitto and Enterprise — each received D ratings. Overall, the district settled with a C, which was on par with the state average.

MDE’s ratings, based on a new test and a recalibrated A-F grading system, considers how well students perform on state tests, whether students are showing improvement on those tests from year to year and whether students are graduating within four years. The system also factors in how well schools are helping their lowest achieving students make progress, according to MDE.

For the previous two years, districts received waivers to use higher grades earned earlier because of changing standards and tests. The C  score received in October will stand as-is, without the option to claim a waiver.

Without a waiver in 2015, the Lincoln County School District would have earned a C then, too.

When the results were announced, Myers said that the district would need to develop a course of action in response to the newest model.

“Currently, we are meeting with principals and lead teachers to identify areas of deficiency,” he said in October. “When a more stringent accountability model appeared, nearly a decade ago, basically we transcended from an academic watch label. In the spring of 2013, Bogue Chitto, Enterprise and Loyd Star achieved high performing status, while West Lincoln was recognized as not only a Star School, but also a National Blue Ribbon School.”

Myers vowed at that time to aim higher. “We may have to rejuvenate our climate of academic excellence, but we will ascend to exemplary academic levels again,” he said. “While these ratings may cloud one’s perception, I am totally convinced that the Lincoln County Schools provide an excellent educational option.”

C grades were given to school districts scoring between  523 to 587 points. Lincoln County, ranked 68th out of 148 districts in the state, scored 559.

Myers asked teachers to push students to do better and to encourage them to stay in school and graduate, but mostly to expect students to always do their best.

It all adds up and every success improves the district rating.

“Every little point makes a difference,” he said.

Mission 588 T-shirts, in periwinkle blue, were given to every employee of the district to remind them of their goal. The highest rated school will also win a championship trophy.

“We have to compete a little for all of us to win,” he said. “We are one school district, working together. You have the potential and the platform to be a blessing to a child.”

Myers choked up a bit when he talked about the choice of periwinkle for the shirts. It’s the color used to represent November as Stomach Cancer Awareness Month. Myers’ wife died from gastric cancer.

His own medical issues were on his mind Tuesday as he spoke to the full room.

“Medically speaking, I should have checked out. I had a total occlusion in my left descending coronary artery,” Myers said. “I felt pain in the center of my chest and broke out in a clammy sweat. I didn’t think too much of it, until I got to work and my fellow co-workers told me to go to the hospital.”

His family met the ambulance at Southwest.

“My wife had passed away from cancer years ago. I just kept thinking about one of the last things she told me and that was to take care of her babies,” Myers said. “That’s what you as teachers do every day. You take care of people’s babies.”