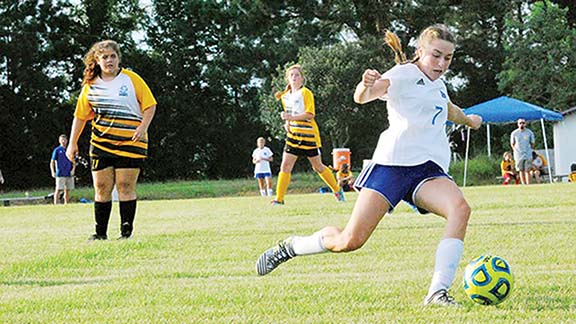 Madalyn Oglesby of BA (7) kicks the ball in its game Tuesday. (Photo submitted)

The Brookhaven Academy Lady Cougars soccer team played with a lot of fire in the 2017 Kickoff Classic over the weekend and finished in second place.

Heavy rain went away just in the nick of time to get play started Saturday morning as the 2017 season officially kicked off with ease.

Oak Forest Academy defended its title and overcame the Lady Cougars for the second year in a row and won the championship game by a final score of 3-0. Franklin County defeated Natchez Cathedral 3-1 to finish third overall in the kickoff classic.

“Hats off to Oak Forest. They have a very good team with dangerous goal-scorers and a solid defense,” head coach Mark LeBlanc said. “Their goalie and defense did not allow a goal all weekend and they are a difficult team to play and defend. They also had to play through the toughest bracket to get to the final game.”

In a weekend filled with tough competition and constant games, the Brookhaven Academy Lady Cougars battled through plenty of adversity to earn second place. The team finished the kickoff classic with two wins, one loss and one tie.

“This was another great event at the sports complex. The weather made us a little nervous, but everything worked out and we stayed on schedule the entire weekend,” LeBlanc said. “The girls played hard and we were able to play all 18 of our players in each game. With many new players, it is necessary to play in these events to be ready for district play in a few weeks.”

The back line on defense did not allow a shot on goal until the second half of its second game. Sophomore goalkeeper Olivia Lewis had three shutouts in four of the games during the kickoff classic.

On offense, sophomore Lucie LeBlanc led the way for the Lady Cougars with four goals during the kickoff event, eighth grader Anna Caroline Adams had one goal, Ainsley Allen had three assists and Kaitlyn Bass was credited with one assist.

Brookhaven Academy will play in another tournament Saturday at the Parklane Academy soccer invitational.

Brookhaven Academy followed up their kickoff classic performance with a win Tuesday night against the Laurel Lady Hawks by a score of 7-1.

Allen led the way for the Lady Cougars with two goals and one assist. LeBlanc, Adams, Bass, Amelia Anding and Maggie Sanford scored the other goals. LeBlanc also had three assists for Brookhaven Academy.

“The girls played a great game,” LeBlanc said. “We were able to get the early lead and play a lot of young girls and different combinations. There will be a step up in competition this weekend, but the girls will be ready.”

The Lady Cougars have been impressive so far in the young season, especially with 10 new players on the team. The younger players have stepped up in crucial points in every game and made the most of their opportunities.

That’s a good sign for a team going through a long season.

“The most important thing about this team is their attitude and willingness to learn. They are improving every game,” LeBlanc said. “Defense will be this team’s strength and we know that we are going to struggle to score against some of our quality district opponents. Our main focus the next few weeks will be getting the midfielders and strikers to try and find the right combination that helps us attack our opponents back line.”

TUSCALOOSA, Ala. — The Copiah-Lincoln Community College cheerleaders had a successful camp on the campus of the University of Alabama... read more