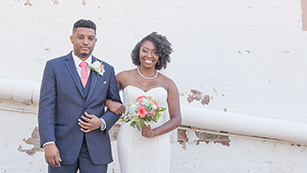 Alicia Curry and Christopher Earl were united in marriage July 14, 2017, at the Piedmont Room in Atlanta, Georgia. Rev. Stephen Earl officiated the ceremony.

The bride is the daughter of John Curry, Alice Carothers and Steven Carothers. She is the granddaughter of Alice Black of Como and Shirley Carothers of Taylor.

The groom is the son of Stephen and Brenda Earl. He is the grandson of Versie and Addie Smith of Brookhaven, and E.J. and Glossie Earl, also of Brookhaven.

All members of the bridal party have been best friends of the bride for over 20 years. Jasmia Jospeh of McDonough, Georgia, was maid of honor. Paula Brown of Muscle Shoals, Alabama, and Ciara Williams of Bartlett, Tennessee, were matrons of honor. Bridesmaids were Jessica Earl of Brookhaven; Rosland Holland of West Palm Beach, Florida; Gertrude Lumor of Dallas, Texas; Latrena Montgomery of Madison; and LaTeisha Morgan of Las Vegas, Nevada.

After honeymooning in Ocho Rios, Jamaica, the couple now resides in Atlanta, Georgia.

Mr. and Mrs. Michael Jarancik and Mr. and Mrs. Troy Orr of Brookhaven announce the engagement and approaching marriage of... read more