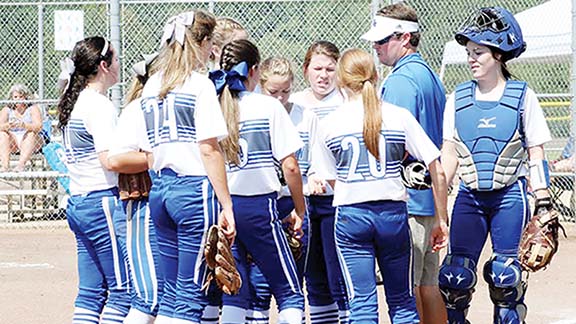 The Lady Cougars suffered their first loss of the season Saturday morning as they fell to rival Simpson Academy by a score of 5-1. BA needed to bounce back in a hurry and did so with a victory over Presbyterian Christian by a score of 6-1.

The team dropped their final game against Tri-County Academy and fell by a score 9-8. The Lady Cougars went 1-2 on the day and fell to 4-2 overall on the young season, but the team played hard all day.

“Playing three games in seven hours is pretty much the story of our day,” Brookhaven Academy head coach Becky Flowers said. “There were some really good highlights and some mistakes that we will learn from and basically provided the bookends for the day.”

With an early start time, the Lady Cougars fell flat against a strong Simpson Academy team and fell by a score of 5-1 to start the day.

Simpson took the lead in the top of the first on a wild pitch to make it 1-0. A fielding error by Simpson in the bottom half of the inning tied the game at 1-1.

A two-run homer by Simpson Academy in the third and two RBI singles in the fifth put the game away as the Lady Cougars dropped game one of the day.

Madi Smith got the start for Brookhaven Academy and pitched 4.1 innings, giving up five runs (three earned), six hits, one walk and one strikeout.

Madison Moak led the Lady Cougars at the plate going 3-for-3.

Trailing 1-0 heading to the top of the fourth inning, Brookhaven Academy scored three runs in the top half and three more the rest of the game, taking home the victory 6-1.

In the top of the fourth, RBI singles from Moak, Julie Anna Bartram and K.K. Jordan put three runs on the board for the Lady Cougars.

The team added on three runs in the final two innings to extend their lead and secured the 6-1 victory.

Emily Claire Felder got the win on the mound for the Lady Cougars, pitching five innings, giving up one earned run on four hits, no walks and two strikeouts.

“We found our way halfway through the Presbyterian Christian game with momentum pushing us through the last two innings of the Tri-County game,” Flowers said.

Moak once again led the team at the plate, going 3-for-4 with two runs scored and one RBI as well. Bartram also went 3-for-4 at the plate with one RBI.

Brookhaven Academy suffered a heartbreaking loss to end the day after giving up a 8-0 lead in the final two innings and fell 9-8.

“I’m not super concerned with wins and losses at this point, just mostly with maturing through games with our young players,” Flowers said. “Working on playing seven complete innings every time we go out.”

It was a hit parade Saturday to end the day with the Lady Cougars rattling off eight hits, but Tri-County responded with 12 hits.

Smith got the start in game three, pitching 3.2 innings and giving up four earned runs on eight hits, no walks and three strikeouts. Felder replaced Smith and pitched one innings, giving up five runs (none earned) on four hits with one strikeout.

“Completing all seven innings is our goal and when we do that consistently, the wins will take care of themselves,” Flowers said.