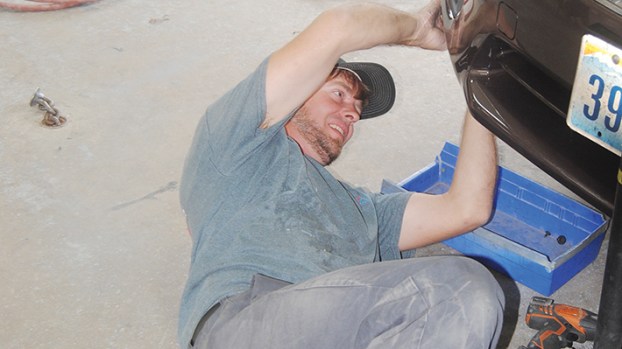 Smith brothers ‘committed to being the best’

Two brothers from Brookhaven give God the credit for helping them start and grow their body shop business.

Adam and Chad Smith, owners and founders of Smith Bros. Collision Center and Truck Accessories, opened their business in the fall of 2000.

“At the time, my brother Chad was working in McComb as an accountant and I was working at a body shop down there as well,” said Adam Smith. “We’ve always loved being around cars and talked about opening up our own shop one day.”

The brothers had talked about opening up a mechanical shop — a place where you could get quick service, such as an oil change and a car wash.

“It just so happened that I got notified that Stan King was shutting down the body shop right next to his dealership. I called my brother and told him about it and he told me that he didn’t want a body shop. A week later we bought it,” he said. “We enjoy it and we wouldn’t be here if it wasn’t for our Lord and Savior Jesus Christ.”

Adam was 21 years old at the time and his brother was 28. Smith said he was a little nervous.

Four years later in 2004, the Smith brothers opened up their second location in McComb. In 2015, they opened their third location in Hattiesburg.

Smith said they don’t plan on slowing down.

“We’re going to where the industry leads us. Our eyes are always open to something in the future,” he said. “We don’t want to look so far in the future that we forget about what we’ve already done.”

The brothers pride themselves on being there for their employees. Smith said every day they are trying to think of something new or different to benefit their staff.

Whether it’s from different tools or materials, Smith said the biggest challenge in the future is the constant change of technology.

“Technicians are skilled craftsman and no one can do what they do. You have to have a certain mindset and skill set to do what they do. With cars and technology evolving, everything is computerized now,” Smith said. “Back in the day you could just hammer stuff back into place, now you have sensors on everything. You have to reset door handles, taillights and many more things.”

With cars evolving quickly, the duo pride themselves on staying on top of the constant changes.

All of their shops are I-Card gold class certified, which means they have to go through specific training. Smith said they hope to get Honda certified in the next few weeks.

To be Honda certified, a shop has to have certain equipment, lighting and technology.

“It’s a lot more in-depth,” Smith said. “We’re committed to being the best we can be.”

Adam and Chad were both born and raised in Brookhaven. They are West Lincoln High School graduates. They also have another brother named Kevin, who works for Grand Gulf.

“A lot of families can’t work together. Thank the Lord that Chad and I have worked together for 17 years and never had any issues,” Smith said.