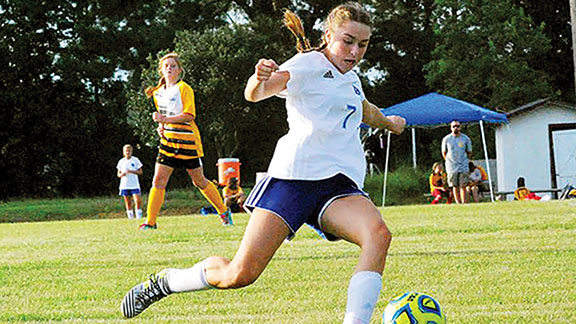 Photo submitted Madalyn Oglesby of BA (7) dribbles the ball down the field in a game played recently.

The Brookhaven Academy Lady Cougars scored four goals in the second half on a rainy night in Laurel and ran away with a 4-0 victory.

It was a sluggish start for both teams in the first half as the two sides had trouble connecting on passes with the wet conditions.

“It took them a little time to get in the groove and play like they were capable of playing,” Brookhaven Academy head coach Mark LeBlanc said. “Our spacing was awful in the first half and we really have to fix that to play better the rest of the season.”

In the second half, the Cougars were able to maintain constant pressure on the Lady Hawks.  Senior captain Kaitlyn Bass started the scoring with a penalty kick in the corner post. Soon after that, Ainsley Allen had her shot deflected by the goalie and was put in the net by Lucie LeBlanc to make it 2-0.

Senior captain Madalyn Oglesby scored the third goal when she kicked about a 30-yard goal over the goalies head and into the net.

The final goal was scored when senior Summer Hill connected on a pass to Anna Caroline Adams, who chipped the ball over the head of the goalie into the back corner of the net.

With the victory over Laurel, the Lady Cougars move to 5-3-1 on the season with a game against Parklane Academy tonight.

LeBlanc was really impressed with the play of Bass, goalie Olivia Lewis, Natalie Rials and Maggie Sanford in the victory.

Even in the 4-0 victory, there are still plenty of areas where the head coach thinks the team needs to improve on.

“There are plenty of things we will work on moving forward,” LeBlanc said. “I can’t complain about their effort, but we just have to practice more and work on our concentration.”

Overall, a win is a win and the team is happy with the victory.

“Olivia Lewis continues to be outstanding at goalie and has shown great hands and instincts. She will be key to our team’s performance in district play this year,” LeBlanc said. “Our front line did a really good job and they did really well playing the striker position.”

It was a freak injury that sat Brookhaven starting quarterback Sevante Quinn for the last half of the 2016 football... read more