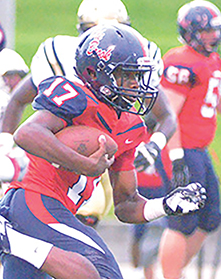 It was a freak injury that sat Brookhaven starting quarterback Sevante Quinn for the last half of the 2016 football season.

It was a play the signal-caller ran many times in practice and in previous games.

In the second quarter against Provine last season, Quinn planted his leg awkwardly and suffered an injury that eventually sidelined him for the rest of the season.

“Any time you lose your starting quarterback, it’s going to force the team to adjust,” Ole Brook head coach Tommy Clopton said. “Sevante started 14 games in a row, but Byrion Robinson came in a tough spot for a freshman and guided us to the playoffs.”

Robinson led the Panthers to a 3-2 record the rest of the season, including a playoff loss to Hattiesburg to end the year.

It was painful for Quinn to watch his teammates go out there and battle with him watching from the sidelines. The quarterback learned a lot from that experience and it’s helped mold him into a stronger person and leader.

“Sevante was faced with very tough circumstances for a 16-year-old to face,” Clopton said. “He went through the whole spectrum of emotions, but I think he values the opportunity to compete with his teammates now more than ever.”

In the seven games that he played in last season, Quinn threw for 788 yards with 10 touchdowns and five interceptions. Quinn also rushed for 407 yards on 58 carries and two scores.

On offense for the Panthers, the quarterback manages the game and makes sure the offensive gameplan is ran to perfection. With running back Damarrell Leggett returning for his senior year and three of the top four receivers returning, Quinn has plenty of weapons at his disposal to improve as a football player.

All the tools are there for Quinn to improve and being fully healthy entering the season certainly helps.

“He’s improved his grasp of what we are trying to do on offense,” Clopton said. “He understands his role within our offense and has done well at giving us a chance to be successful.”

With the expectations placed on the Brookhaven football team this season, a lot of the pressure falls on the starting quarterback.

His calm demeanor and cool-under-pressure attitude has kept him afloat in difficult times during the season. Those traits are important for any quarterback to have and Quinn has expressed those attributes over the years.

“He never shows a lot of emotion,” Clopton said. “He’s able to stay calm in difficult situations. I think he’s taken the expectations in stride and is focusing on producing on the field.”

Those expectations will start to pick up this weekend when the Panthers hit the road to play Brandon in a jamboree and the following week when they host 6A power Pearl to open up the season.

This will be the third year starting for Quinn, but the gameplan remains the same for the signal-caller even with bigger goals in mind.

“Your QB is always a leader for your team,” Clopton said. “We need him to make sure we are in the right play and execute it at a high level.”

Quinn has gained confidence since the injury last season and his teammates have full confidence in the third-year starter to lead them to their ultimate goal.

“He’s confident at this point in the preseason,” Clopton said. “He has a really good grasp of our offense and we look forward to watching him lead us this fall on King Field.”

Brookhaven High School head football coach and athletic director Tommy Clopton knew what he was getting into when he was... read more