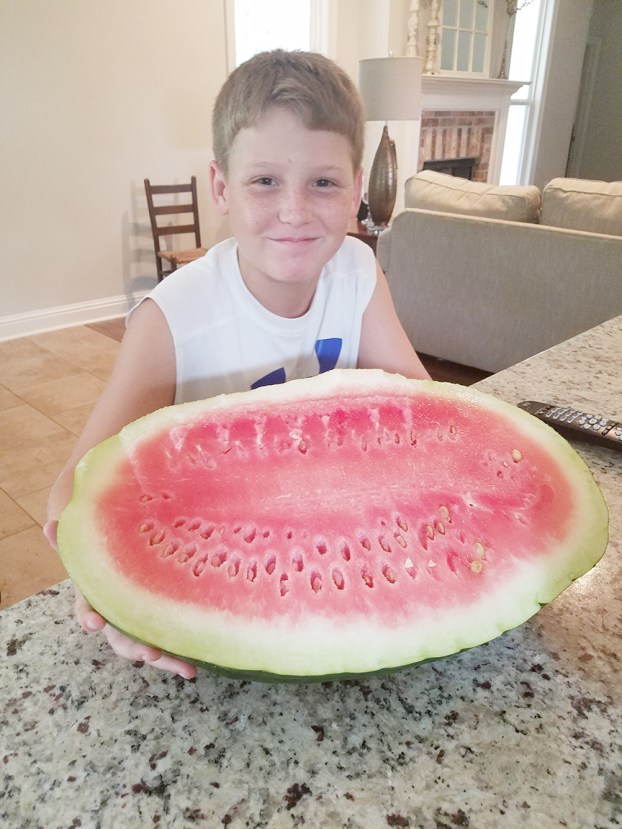 Photo submitted/Mason White shows off the 43-pound watermelon that earned him the $100 top prize in the Lincoln County Master Gardeners annual contest.

A Brookhaven fourth-grader outsmarted hungry deer and wandering weeds to produce a record-breaking melon for a local gardening contest.

Mason White, who is now a fifth grader at Lipsey Middle School, took home the top prize of $100 in the annual contest sponsored by the Lincoln County Master Gardeners.

At 43 pounds, the Congo watermelon is half Mason’s weight. It’s also the biggest the organization has seen.

“There were less than ideal conditions to grow watermelons this year with a wet weather and cooler than normal temperatures, said master gardener Steve Edge. “However, Mason White overcame this handicap with a 43 pound melon, the heaviest watermelon that has ever been weighed in beating last year’s record of 34.4 pounds that was grown by Joseph Sauls.”

This was the first year that Mason, the son of Melissa and Matt White of Brookhaven, has entered the contest.

The Lincoln County Master Gardeners distribute seeds to fourth graders across the county in April and May with hints on how to grow them.

Mason paid attention and carefully carried his packet home. He had a plan to turn his seeds into a GoPro video camera.

“He’s trying to convince me to let him buy a GoPro,” his mother said. “He’s been planning for weeks if he won the contest, what he’d do with the money.”

Mason turned to the expert in the family for guidance — his grandfather James Richmond, a retired county agent with a green thumb and good soil in his yard.

“Mason enlisted my dad to help him with the watermelon,” White said.

Richmond insisted Mason do the work and the young boy, who lives near his grandparents, planted the 10 seeds and fertilized the ground.

The 11-year-old got excited as his garden started to grow. So did the deer.

“We noticed deer were eating the vines,” White said.

Richmond and Mason, along with his older brother Matthew, built an electric fence around the patch to guard it.

He watched over his garden until Saturday when it was time to take the biggest melon to the Exchange Club Fair to be judged. Two out of the patch were larger than the rest so he weighed them both and took the biggest. The other was a 35-pounder, which was just one pound heavier than the melon that won second place.

For his trouble, Mason took home the $100 prize and the fruit.

“We cut the watermelon the next day and it was pretty good,” White said.

Mason, however, would rather sell the produce than eat it. He sold the 35-pound melon to someone who came to buy tomatoes from his grandfather. He’s got another 20 still growing on the vines.

The other winners in the contest were both students at Bogue Chitto Elementary.

Third Thursdays are for young professionals

It’s time for millennials to relax and socialize. The Brookhaven Lincoln County Chamber of Commerce will kick off its Third... read more