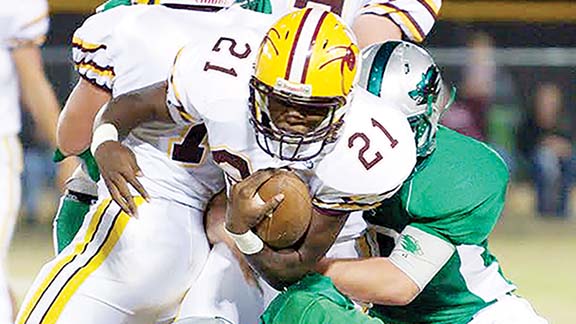 Senior running back Daren Richardson of Enterprise (21) runs the ball through defenders in a game played last season. (File photo)

UPDATE: The Lawrence County jamboree has been cancelled. Wesson will play West Lincoln tonight at West Lincoln. Varsity starts at 7 p.m. with junior varsity to follow.

Football season is right around the corner in Lincoln County and surrounding areas.

While the regular season doesn’t start until next week, Friday night kicks off jamboree games for many of the local schools.

Brookhaven Academy faced off against Adams Christian and Amite School Thursday night and showed off their new look with 35 players total on the opening roster.

Tonight, the Brookhaven Panthers travel to Brandon to face 6A power Brandon High School to open up play in 2017.

Lawrence County will host a jamboree, which will feature West Lincoln, Wesson, South Pike and Puckett.

Bogue Chitto will host a jamboree as well, facing Sacred Heart to start off the night and Enterprise to end the competition.

The games do not count in the wins and loss columns, but it’s a measuring stick to see where each team stacks up before the real games start the following week.

Even as a warm-up game, facing a 6A power is no easy task and the Panthers will find out quick where they stand facing the Brandon Bulldogs.

After a 10-4 overall record in 2016, the Bulldogs will field a different team this season as they replace their starting quarterback and two leading rushers. Defensively, they also have to replace four of their five leading tacklers. Even though there are a lot of new faces, Brandon has no problem replacing talent and should be near the top of 6A football this season.

Head coach Tommy Clopton and the Panthers face a physical Bulldogs team and will be tested right out of the gate tonight.

Bogue Chitto comes into the 2017 season looking for a new direction after finishing last season winless at 0-11.

With two-way starters Trey Nettles, Lafredrick Dillon and Damarcus Godbolt coming back, the Bobcats seem to be heading in the right direction.

They’ll know where they stand against local competition tonight when they host Enterprise and Sacred Heart in a jamboree.

Senior running back Tanner Waldrop leads the team on offense with sophomore Tailor Young and senior Kail Jordan leading the team on defense.

The two Lincoln County schools will face off against a Sacred Heart team that’s coming off a 6-5 season and a playoff appearance.

The team from Hattiesburg racked up impressive wins last season against West Lincoln, Loyd Star and Bogue Chitto before falling to 1A power Nanih Waiya in the first round of the state playoffs.

The Crusaders are returning a solid football team with quarterback Zach Weatherell, leading rusher Campbell Klein, and their two leading receivers Joseph Bishop and Paul Rowell Jr. all returning for their senior seasons.

The Lawrence County Cougars are coming off a tough 4-8 season after losing star quarterback Charl’tez Nunnery and starting running back Quitten Brown due to injury.

Nunnery and Brown are gone and tonight will provide an opportunity to see how the new-look Cougars will play on the field.

The Cougars will face South Pike in their first action of the season. After starting the 2016 season 3-0, the Eagles lost six of their last seven games to finish 4-6 and missed the playoffs. South Pike will have to replace their starting quarterback, but return their top two rushers and two of their top three receivers from last season.

The Lawrence County junior varsity team will face off against West Lincoln in the first game of the jamboree.

With new head coach BJ Smithhart in charge, the Bears are hoping for a change with the winning culture that Smithhart brings from St. Aloysius. The Bears are led by seniors Chase Owen, Brandon Smith and Gabe Nations to carry the new program out on the gridiron.

To end the night, the Wesson Cobras square off against Puckett. The Cobras started 4-2 in 2016, but dropped their final five games of the season, including an 80-47 loss to Wilkinson County to end the season 4-7.

Defensively is where head coach Jeremy Loy and the Cobras know they need to improve at. Tonight will give Wesson fans a glimpse of their new defense and their high-scoring offense led by Dale Thigpen.

The Brookhaven Academy Lady Cougars scored four goals in the second half on a rainy night in Laurel and ran... read more