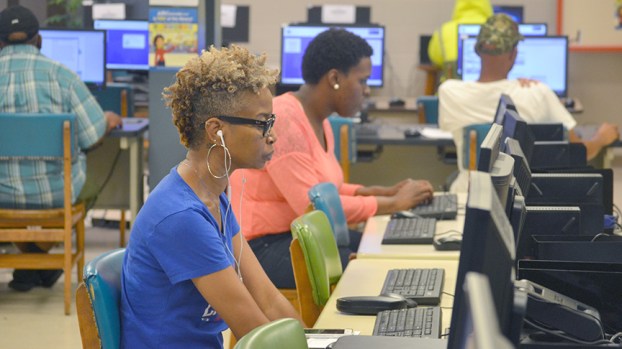 Photo by Donna Campbell/Patrons make use of the computers at the Lincoln-Lawrence-Franklin Regional Library Thursday. Pictured are, from left: Ana Johnson and Markeyta Kelly, both of Brookhaven.

The days of getting shushed in the library are no more.

Especially the main branch of Lincoln-Lawrence-Franklin Regional Library in Brookhaven, which has become a hangout for kids, teenagers, jobseekers, retirees, friends and families, said Helen Lynch, who is chairwoman of the library board.

“That’s one of the things we’ve done recently is update our lobby with comfortable chairs,” she told the Brookhaven Board of Aldermen recently. “We can talk now. No longer is the library a quiet place to be. You can come and visit with friends.”

Lynch addressed the board to request additional funding as aldermen work out their budget for the next fiscal year.

The library sees about 450 faces come through their doors each day in the summer months, which is only about 125 more than usually visit daily.

They come to read or check out books, magazines and DVDs, to use the computers or the computer stations, to participate in reading programs and to shop in the Friends of the Library ongoing book sale. They come to attend classes and meetings and to enjoy the many pieces of art on display — including those by the Brookhaven Regional Arts Guild featured monthly artist and Dr. Kim Sessums, and bronze pieces by Sessums and the late Bruce Brady, she said.

“Lots is going on and we feel like we are partners with you helping our community improving the quality of life,” she said. “We lean on our local businesses and individuals to help with a lot of funding, but as you may know, the local funding and the state funding is how we support our ongoing day in and day out expenses — our salaries, our equipment purchases, our books, all of our materials. And in the last two years, we have been cut at the state level.”

She said to make up for some of the cuts, two employees who retired will not be replaced. They’re also applying for federal grants to help.

“What’s hurting is we can’t buy computers. We’re not buying equipment. That’s another area that we can cut back,” she said. “But that really is one of our most needed things, is to have so many computers for the public to use.”

Lynch touted some of the library’s successes this year.

The children’s library saw more than 200 kids in the summer reading program.

They also started a pilot program in April to get second graders to apply for library cards. More than 500 students from Brookhaven Elementary, Brookhaven Academy and Loyd Star, Enterprise, West Lincoln and Bogue Chitto elementary schools toured the library.

Second graders were given a bookbag with a book, an apple and information about the library. The extras were paid for through sponsorships.

“We were so successful that we’re going to do it every year in September and Smith Insurance has said that they will fund it from here on out,” Lynch said. “We’re hoping that we can grow some young readers.”

Mayor Joe Cox said he is impressed by what’s offered at the Brookhaven library.

Aldermen are discussing the city’s budget throughout August at worksessions on Tuesdays and Thursdays in the board room in the Lincoln County Government Complex.

The board must approve the budget before Sept. 15.

Library Director Henry Ledet said they’ll make the same pitch to the Lincoln County Board of Supervisors at their Aug. 21 meeting.

Where do the clothes and shoes go?

Q: What happens to the clothes that are crammed into donation boxes scattered around Brookhaven? A: Several parking lots throughout... read more