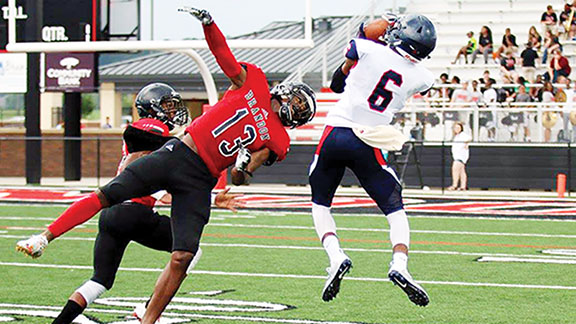 Senior Jemaurian Jones of Brookhaven (6) makes a leaping interception in their scrimmage against Brandon Friday night. (Photo by April Clopton)

Brookhaven falls to Brandon in scrimmage

It was only a preseason scrimmage for the Brookhaven Panthers Friday night at Brandon, but it provided a measuring stick of where the team stands as of right now.

The two teams only played two full quarters in a scrimmage format, but the Brandon Bulldogs used two touchdowns and solid defense to win the scrimmage by a score of 14-0.

Brandon comes into the 2017 season off a 6A playoff loss in the quarterfinals to Petal 14-10 and wanting to make another run in the playoffs.

Their offense put up enough points and the defense pitched a shutout to stop the Panthers and win the preseason scrimmage.

“We had some guys that played well in spurts,” Brookhaven head coach Tommy Clopton said. “We’ve got to do a better job of getting all 11 players on the same page.”

Sophomore quarterback Will Rogers got the start for the Bulldogs and led the team on a scoring drive in their first possession of the game. Rogers connected with junior wide receiver Jonathan Mingo on a 61-yard touchdown pass to put Brandon up 7-0 with less than five minutes into the first quarter.

The Panther defense played hard midway into the second quarter, which included a leaping interception by senior defensive back Jemaurian Jones.

With 6:30 left in the second quarter, Rogers led a lengthy scoring drive, capped off by a seven-yard touchdown pass to senior tight end Reed Tyler to give the Bulldogs the 14-0 lead.

The rest of the game went scoreless and they fell to 6A power Brandon by a score of 14-0.

Even in a scrimmage loss, the Panthers were given a great test a week before their battle at home this Friday night against the Pearl Pirates.

“This Friday night is going to be a challenge, no doubt,” Clopton said. “Pearl will be a great measuring stick to see where we are at this point in the season.”

Coach Clopton has been saying before the season that the first two games will say a lot about his team and where they stand against the rest of the competition in the state.

Pearl enters this football season ranked No. 1 in the state and 25th in the nation, according to USA Today. The Pirates return their starting quarterback, running back and wide receiver from last season.

On defense, Pearl returns their top two tacklers from last season in Willie Brown and Tylan Knight. The two leaders on defense combined for 264 total tackles and 16 sacks from a year ago.

The Panthers did not get the scrimmage win against Brandon, but that game proved the team isn’t scared of anyone and they know they can hang with any team in the state.