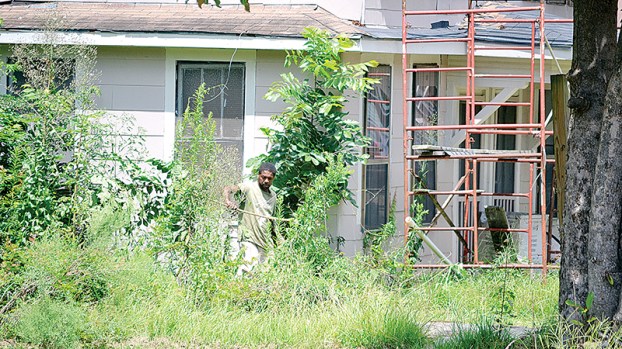 Photo by Donna Campbell/A man cleans up around the property at 215 Railroad St. Monday. The property is expected to discussed at a public hearing Tuesday, Aug. 15.

City to decide fate of properties

The Brookhaven Board of Aldermen at a public hearing Tuesday, Aug. 15, will determine whether or not several dozen nuisance properties are in such a state of uncleanliness as to be a menace to the public health and safety of the community.

The meeting will be at 5:30 p.m. in the city boardroom in the Lincoln County Government Complex.

The city published in The Daily Leader on Aug. 4, 8 and 11, a list of 48 properties that were considered a nuisance. City Building Inspector David Fearn also sent out certified letters with return receipt requested to property owners.

Fearn said a little less than half of the property owners have contacted him about their plans for the parcels, which are located in areas all over the city.

Some of the owners have already asked for the city to clean up their property and demolish buildings if needed, he said.

Others have not responded and the board will make decisions Aug. 15 concerning the fate of those properties.

“In any case, where we take it down, we charge them,” Fearn said.

Work on the yard was being done Monday.

That property as well as a lot located on the corner of North Second Street and Main Street are owned by Lawrence C. Smith Jr. and Roger Smith.

The Smiths were given 90 days to clean up and if progress was made, they’d get another 90 days.

At a hearing in December, Tammie Brewer, who owns several pieces of property on Railroad Street and the piece of property behind the Smiths, testified on behalf of several of the Smiths’ neighbors.

Brewer explained that she has been dealing with the effect of the property’s negligence since the early 2000s and would like something to finally be done to fix the problem.

Some of those named on the nuisance property list have been given more time to complete their cleanup efforts, Fearn said. Those were determined by Fearn examining each property recently or hearing from the owners.

“People have called and asked for more time,” he said.

Before giving an extension, Fearn checked those properties to make sure they were progressing in the cleanup, he said.

Others need to contact Fearn’s office prior to the public hearing “like the letter I sent them said to do,” he said Monday. “After tomorrow, it’s too late.”