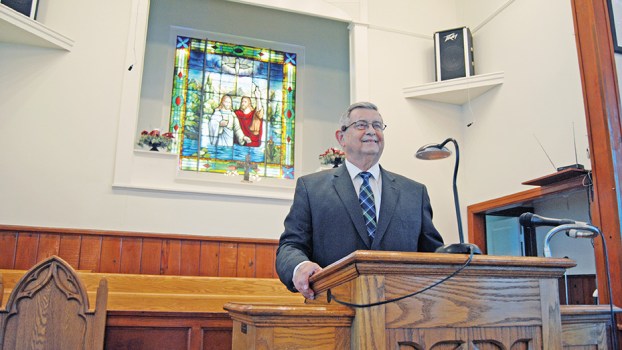 Daily Leader file photo/Pastor Anthony Yarborough preaches from the pulpit of Pearlhaven Baptist Church, one of the 40 Southern Baptist churches in Lincoln County.

Q: How many Baptist churches are there in Lincoln County?

A: Lincoln County has many churches.

These are Catholic, Church of Christ, Latter-Day Saints, Methodist, Episcopal, African Methodist Episcopal, Pentecostal, Presbyterian and those who don’t identify with a particular denomination — at least not in their names. But the one denomination that seems to pop up in names of area churches more than any other is Baptist.

Actually, the Baptist churches are more than just one denomination. Over 60 different types of Baptists exist just in the United States, not counting the hundreds more across the world.

How many of those are in Lincoln County? A lot.

An old saying about churches in the South goes like this: Stand in any random spot and turn in a circle. You could throw a rock in any direction and hit at least one church.

No available list is complete when it comes to naming all the churches in the area, and there may be churches that fall into another Baptist categorization.

“The smallest churches in the county have an average Sunday attendance of only five or six people,” said Steve Jackson, associational missions director for the Lincoln County Baptist Association — a voluntary association of Southern Baptist congregations.

Mississippi became a state of the Union on Dec. 10, 1817, and Lincoln County was officially formed April 7, 1870. But the oldest churches in the area have been around much longer.

“Baptist churches have been in the area since before Lincoln County was a county,” said Jackson, “even since before Mississippi was a state.”

Baptist churches are typically independent and self-governing. Churches can join together in groups or associations for common goals — like mission work — but do not fall in a hierarchy of church leadership like Roman Catholic or United Methodist churches, for example. The other primary identifying mark of a Baptist church is the belief that the only correct method, or preferred method, of Christian baptism is full immersion of a believer. This means that the person must have chosen to follow Jesus on their own (not be an infant or nonbeliever), and must be submersed fully in water, as opposed to sprinkling or other methods of baptism.

The things that divide Baptists into further factions are the same things that divide any denomination — failure to agree on methods of leadership, missionary cooperation, questions of doctrine or any other matter. But the things that unite all Christian churches are central beliefs like the crucifixion and resurrection of Jesus of Nazareth and belief in life after death.

Regardless what church Lincoln Countians attend — if any at all — there are certainly plenty from which to choose.

A city-wide emergency alert system is coming to Brookhaven. Currently there isn’t a system in place to alert people of... read more