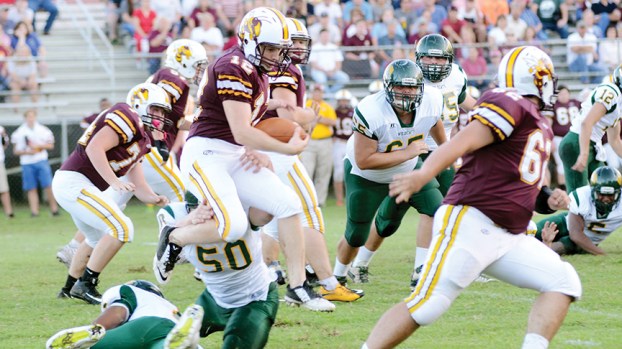 Enterprise senior Tanner Waldrop (12) leaps over a Salem defender on his way down the sideline in Thursday night’s home game victory. (Photo by Dylan Rubino)

Senior running back Tanner Waldrop was the star of the show for Enterprise in its 28-20 overtime win over Salem Thursday night.

With time ticking down in the fourth quarter trailing 20-12, Waldrop busted out a long run and raced for the end zone to trail 20-18.

Sophomore running back and defensive lineman Tailor Young got his number called on the two-point conversion and reached for the end zone, tying the game at 20 heading to overtime.

Enterprise found the end zone early in overtime, but the play was called back for holding.

Still, the Yellow Jackets found a way in overtime when Waldrop rushed for another touchdown to give Enterprise the 28-20 lead.

Salem moved the ball on their possession in overtime, but Enterprise sealed the 28-20 win with an interception near the end zone.

Salem had momentum to start the game as the Bobcats got on the board first on a fourth and goal quarterback sneak from the one-yard line to give them the 6-0 lead. Enterprise quickly responded with a 70-yard touchdown drive to tie the game 6-6.

Salem put together a scoring drive to end the first half with the 12-6 edge over the Yellow Jackets.

With Salem leading 20-12 with just under four minutes to go in the game, Enterprise would end the game on a 16-0 scoring run to seal the victory and start the 2017 football season 1-0.

Enterprise showed a lot of resiliency Thursday night fighting back from multiple deficits to put together two late scoring drives to start out 1-0.

Waldrop shined on both sides of the football for the Yellow Jackets and the entire defense played hard until the final whistle.

Next up for Enterprise is a home matchup against Puckett next Friday. Kickoff is set for 7 p.m.

The long wait is finally over as football season kicks off tonight with three games on the schedule. After injuries... read more